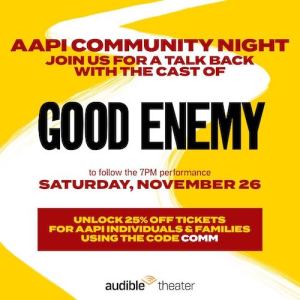 Audible Theater is hosting a special AAPI Community Night on Saturday, November 26. Following the 7 PM performance of Good Enemy, members of the cast will participate in a talkback. AAPI individuals and families can get tickets at a 25% discount using the code “COMM”. Head to www.GoodEnemyPlay.com to get tickets!

A father learns that closing the door to his past means shutting his daughter out in Good Enemy, Yilong Liu’s haunting and hopeful new play. When Howard (Francis Jue) makes a surprise cross-country trip to visit his college-age, Tik Tok-loving daughter, he’s forced to confront the realities of their relationship and the rift between them—a rift caused by Howard’s refusal to face memories of his life as a young man in China. In a smart, thrilling story that deftly weaves two generations and two continents amidst sweeping social changes, Good Enemy explores the power of human connections…affirming that no one lives an “ordinary” life, no matter how hard they might try. 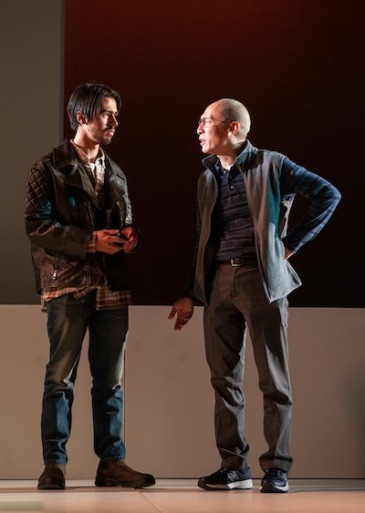 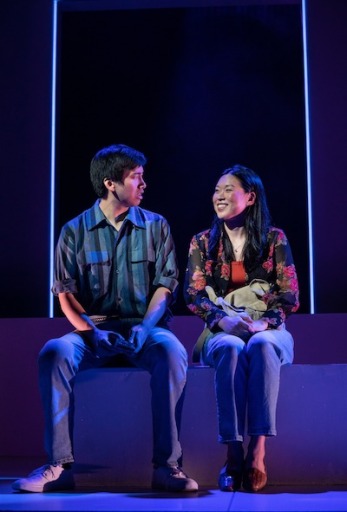 Good Enemy will also be released as an Audible Original, extending its reach to millions of Audible listeners around the world.

Tickets from $35 for Good Enemy are on sale now at www.Audible.com/MinettaLane.

Audible Theater is proud to collaborate with TodayTix to offer $20 mobile rush tickets beginning at 10am each performance day. Tickets are available on a first-come, first-served basis exclusively through the TodayTix app.

Masks are encouraged but not required for patrons at the Minetta Lane Theatre except for the following MASKS REQUIRED performances:

YILONG LIU (Playwright) is a Lambda Literary Award-winning playwright based in New York. He is a 2022-2023 playwright in The Lila Acheson Wallace American Playwrights Program at The Juilliard School, a Core Writer at Playwrights’ Center, and has developed work with Ojai Playwrights Conference, EST/Youngblood, Kennedy Center, Space on Ryder Farm, among others. Plays include The Book of Mountains and Seas (Lambda Literary Award for Drama, Paul Stephen Lim Playwriting Award), June is The First Fall (Yangtze Rep, Kennedy Center’s Paula Vogel Playwriting Award), Joker (Po’okela Award, Kumu Kahua Theatre), PrEP Play, or Blue Parachute (NCTC), and Good Enemy (Audible). Yilong grew up in China and received his MFA from University of Hawai‘i.

RON DOMINGO (Xiong) has been a professional actor in New York City for the last thirty years. Special thanks to Chay and Yilong.

Audible Theater makes outstanding performances and powerful storytelling available to millions of people all over the world. As part of this initiative, Audible has produced Girls & Boys with Carey Mulligan, The Half-Life of Marie Curie with Kate Mulgrew, Harry Clarke starring Billy Crudup, Billy Crystal’s Have A Nice Day with Annette Bening and Kevin Kline, the revival of Aasif Mandvi’s Sakina’s Restaurant, and many others at the Minetta Lane Theatre in New York City. In May 2018, Audible announced that the Minetta Lane Theatre in Greenwich Village will serve as its creative home for live performances in New York. Audible hosts and produces a wide variety of live performances at the Minetta Lane including dramatic plays, comedic shows, engaging panel discussions, and more, with Audible members receiving exclusive access to discounted tickets and related audio content.

Audible was co-producer for the Broadway transfer of the Tony Award-nominated Latin History for Morons written by and starring John Leguizamo and for the Tony Award-nominated Sea Wall /A Life starring Jake Gyllenhaal and Tom Sturridge. The initiative also saw the release of John Lithgow’s Stories By Heart, Judith Light’s All The Ways To Say I Love You, Sharon Washington’s Feeding The Dragon, and more. Since June 2017, Audible has commissioned 40 theater playwrights to receive support from its $5 million Emerging Playwrights Fund dedicated to developing innovative English-language works from around the globe. The $5 million fund enables the creation of original plays driven by language and voice, keeping with Audible’s core commitment to elevating listening experiences through powerful performances and extraordinary vocal storytelling.

Lia Chang is an actor, a multi-media content producer, activist and an Award winning filmmaker and co-founder of Bev’s Girl Films, making films that foster inclusion and diversity on both sides of the camera. Lia is also the host and Executive Producer of BACKSTAGE PASS WITH LIA CHANG, a new Arts and Entertainment program that airs on Sundays at 6:30pm on FIOS 34, RCN 83, Spectrum 56/1996.

Bev’s Girl Films’ debut short film, Hide and Seek was a top ten film in the Asian American Film Lab’s 2015 72 Hour Shootout Filmmaking Competition, and she received a Best Actress nomination. Her short film, When the World Was Young recently garnered a 2021 DisOrient Film Audience Choice Award for Best Short Narrative. Lia has appeared in the films Wolf, New Jack City, A Kiss Before Dying, King of New York, Big Trouble in Little China, The Last Dragon, Taxman. She stars in and served as Executive Producer for the short independent films Hide and Seek, Balancing Act, Rom-Com Gone Wrong, Belongingness and When the World was Young. She is also the Executive Producer for The Cactus, The Language Lesson, The Writer and Cream and 2 Shugahs. BGF collaborates with and produces multi-media content for artists, actors, designers, theatrical productions, composers, musicians and corporations.