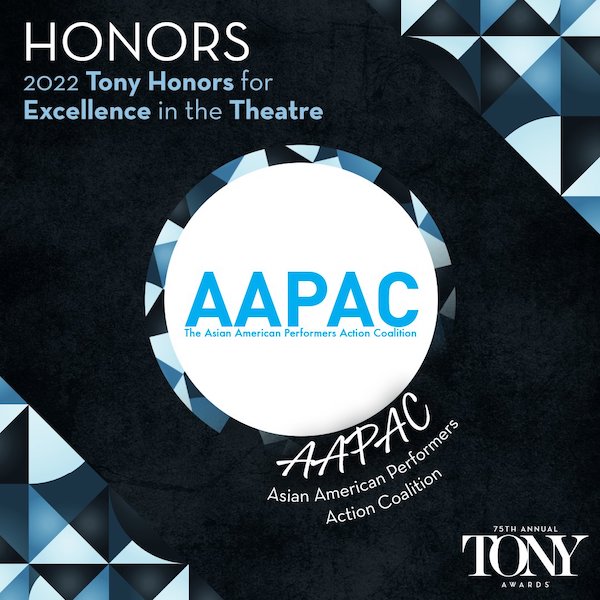 The Tony Awards Administration Committee will present the 2022 Tony Honors for Excellence in the Theatre to five outstanding contributors to the Broadway industry – the Asian American Performers Action Coalition (AAPAC); Broadway For All; music copyist, Emily Grishman; Feinstein’s/54 Below and United Scenic Artists, Local USA 829, IATSE.

The Tony Honors for Excellence in the Theatre were established in 1990 and are awarded annually to institutions, individuals and/or organizations that have demonstrated extraordinary achievement in theatre, but are not eligible in any of the established Tony Award categories.

“All five of this year’s honorees have made outstanding contributions to our Broadway community,” said Charlotte St. Martin, President of The Broadway League and Heather Hitchens, President and CEO of the American Theatre Wing. “Their dedication, commitment and support to the Arts is now more important than ever, and we are thrilled to shine a light on these organizations at this year’s Tony Honors.”

Asian American Performers Action Coalition
Asian American Performers Action Coalition’s (AAPAC) mission is to expand the perception of Asian American performers in order to increase their access to and representation on New York City’s stages. For over a decade, AAPAC has been a leader in discussions and forums on diversity with artistic institutions and the Broadway community. Each year, AAPAC publishes The Visibility Report: Racial Representation on New York City Stages, tracking employment statistics by race on Broadway and at non-profit theater companies in New York City, going back to the 2006-07 season. What began as a search for the answer to the question, “Where are all the Asian actors in mainstream New York theater?” became a yearly documentation of the inequities baked into the theatrical eco-system. The only publicly available report of its kind, it tallies racial breakdowns of actors, playwrights, composers, librettists, lyricists, directors, designers, and gatekeepers including producers and company managers on Broadway as well as artistic directors, general managers, and board members at the non-profits. The report provides further analysis by tracking nuances like how often actors of color were cast in roles not defined by their race, principal vs. chorus contracts, and how often white directors were hired to helm stories about marginalized groups. Their recent report included the first in-depth analysis of racial equity in arts funding in NYC, looking at the disparity in grants from foundations and government sources given to predominantly white non-profits vs. theaters of color, as well as the economic impact of hiring inequities when it came to actual dollars earned by actors of color vs. their white counterparts. The report has been an important resource in the national conversation on diversity within the industry, raising awareness, tracking trends over time, expanding perceptions and opportunities, and helping to define the solutions needed to transform the industry to be more inclusive. Throughout its 11 years, AAPAC has also addressed inequities head on, working in closed door sessions with institutions seeking to do better as well as leading public campaigns against exclusionary and biased hiring practices such as the Beyond Orientalism initiative against the continued use of yellow face casting around the country created in partnership with Theatre Communications Group (TCG), The Asian American Arts Alliance, the Alliance for Inclusion in the Arts and the Smithsonian Asian Pacific American Center. From its inception, AAPAC has sought to empower Asian American artists through community. Most recently, to address the devastating rise in Anti-Asian violence in New York City, AAPAC has partnered with IndieSpace/Indie Theater Fund, the American Theatre Wing, the Dramatists Guild Foundation and The Actors Fund to launch the AAPI Emergency Transportation Fund to help keep AAPI theater workers safe while commuting to and from work. The AAPAC Steering Committee is comprised of: Pun Bandhu, Cindy Cheung, Angel Desai, Vichet Chum, Christine Toy Johnson, Peter Kim, Julienne Hanzelka Kim, Kenneth Lee, Eileen Rivera, Nandita Shenoy and Lipica Shah. www.aapacnyc.org 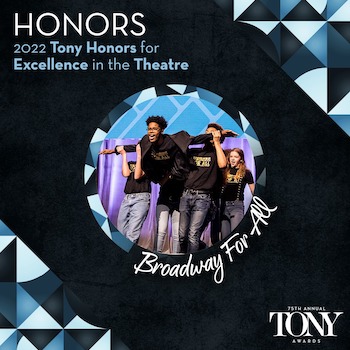 Broadway For All
Broadway For All (BFA) is a Manhattan-based national organization that equips young artists and professionals with the programming, community, and vision to build a more inclusive and powerful arts industry. Founded in 2012 by Osh Ashruf (Ghanimah) through Harvard University’s Presidential Public Service Fellowship program, BFA strategically integrates teens of diverse socio-economic statuses, ethnic identities, and zip codes – who were designed not to meet – and bursts ideological bubbles to foster discourse among the young artists. Through donor-funded programming, students train with stage and screen trailblazers while exchanging ideas and expanding their worldviews to develop into passionate artists and socially conscious leaders. Today, BFA operates: its flagship Summer Conservatory (with tracks in Musical Theater, Drama Performance, Playwriting, and TV/Film Production); BFA 365, to coach alumni applying to arts high schools and colleges; and Access For All, to coach historically excluded communities to experiences in theater and arts entertainment. Learn more at broadwayforall.org.

Emily Grishman
Emily Grishman is a music copyist for Broadway, Off-Broadway and Regional theatre. Emily provides the written instrumental parts and full scores (sheet music) that are used by each of the musicians in the orchestra pit and by the conductor of each show, working closely with composers, orchestrators, and players. Emily Grishman Music Preparation has supervised over 130 Broadway productions, countless other theatrical endeavors (including work for most of the New York not-for-profit theatres), film and TV projects and copying/library work for many individual artists. More than thirty years ago, Emily started out with pen and ink and since then has become expert in the use of both Finale and Sibelius notation software. Emily is an active member of Local 802, American Federation of Musicians, ASMAC (American Society of Music Arrangers and Composers), and serves as Secretary of the Board of Maestra Music, a thriving not-for-profit that provides support, visibility and community to women and nonbinary people who work in the musical theatre industry. She teaches technical workshops and participates as a mentor to young women entering the field. 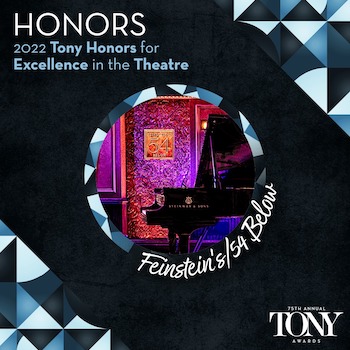 Feinstein’s/54 Below
Feinstein’s/54 Below was founded as a place for the community to celebrate Broadway performers, both established and new, who sing not only the music of Broadway and the Great American Songbook, but also new material intended for Broadway and off-Broadway stages. The club features fine dining and superb scenic, lighting, and sound designs entirely imagined by Broadway designers. For performers, writers, musicians, and more, Feinstein’s/54 Below gives opportunities to advance their craft, expand their repertoires, and develop their voices in a way that is more personal, making them stronger as artists. It gives Broadway fans an opportunity to see their favorite artists in a different way, deepening their relationship and understanding of their talent.

Feinstein’s/54 Below celebrates Broadway musicals and writers of the past and present, promoting an ongoing engagement with their work. It is also a place for innovation in musical songwriting and performance. Collaborations born at Feinstein’s/54 Below give rise to and help develop new theatrical projects and new musicals. In addition, its popular streaming video activities and audio recordings support these activities, helping to build a new Broadway audience worldwide, both in age and geography.

Feinstein’s/54 Below is one of the most in-demand performance venues in the city, presenting over 700 shows each year. Unique in its mission, it has become an indispensable member of the Broadway ecosystem, providing a place for seasoned and emerging artists to hone their craft, try out new work, grow their fanbases, and gather as a community. Along with a creative partnership with Michael Feinstein, the management team includes proprietors and nine-time Tony Award winning Broadway producers Steve Baruch, Richard Frankel, and Tom Viertel, Creative and Programming Director Jennifer Ashley Tepper, and restaurant General Manager Mandisa Boxill.

United Scenic Artists, Local USA 829, IATSE
United Scenic Artists, Local USA 829, IATSE is the national labor union and creative community of designers, scenic artists, and professionals working across the entertainment industry. For over 125 years, Local USA 829 has proudly represented and advocated for its members and professionals working in live performance, film, television, and commercials through collective bargaining, action, and solidarity. As the creative backbone of the entertainment industry, Local USA 829’s members tirelessly enhance the stories that captivate audiences. In addition to its mission to establish fair wages for designers, scenic artists, and professionals, the union negotiates and advances health insurance and retirement benefits through employer contributions to pension, health care, 401(k) and annuity. Equally important, however, is Local USA 829’s dedication to bolster an inclusive, anti-racist entertainment industry, one which provides sustained and significant opportunities for underrepresented artists and workers on and off stage and screen.

From coast to coast, Local USA 829 seeks to foster the continuous improvement of the working and living standards for its members as well as elevate and celebrate the many crafts and categories of its membership, which includes: Scenic, Costume, Lighting, Sound, and Projection Designers; Scenic Artists; Computer Artists; and Art and Costume Department Coordinators.

About the Tony Awards
The 75th Annual Tony Awards, hosted by Ariana DeBose, will take place LIVE from the legendary Radio City Music Hall in New York City on Sunday, June 12, 2022 (8:00 – 11:00 PM, LIVE ET/5:00 – 8:00 PM, LIVE PT) on the CBS Television Network, and streaming live and on demand on Paramount+. The celebration will commence at 7:00-8:00 PM, ET/4:00-5:00 PM, PT with exclusive content streaming only on Paramount+. Hosts and further information on the Paramount+ presentation will be announced at a later date. The Tony Awards are presented by The Broadway League and the American Theatre Wing.

The Tony Awards eligibility cut-off date has been extended for the 2021-2022 season to Wednesday, May 4, 2022 for all Broadway productions which meet all other eligibility requirements. Tony Award winner Adrienne Warren and Tony Award Nominee Joshua Henry will host the 75th Annual Tony Awards Nominations on Monday, May 9th at 9:00 AM ET on the Tony Awards official YouTube page.

A limited number of tickets to the 75th Annual Tony Awards will be made available. Tickets will be available at www.TonyAwards.com/tickets starting on Monday, May 9th at 9:00 AM ET / 6:00 AM PT.