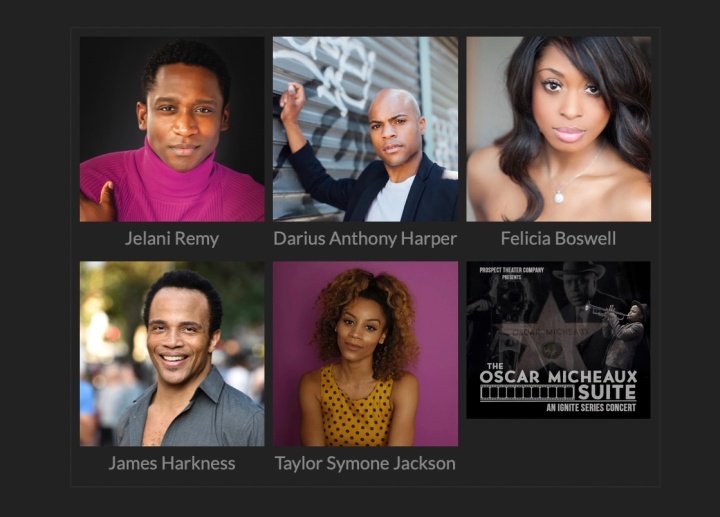 The Oscar Micheaux Suite is a special event featuring a six-piece jazz ensemble as well as featured vocalists, debuting new songs from a jazz musical in development. The music is composed by multi-GRAMMY Award nominated jazz artist Alphonso Horne, who is also the bandleader and will play trumpet for the engagement. Lyrics are by Jesse L. Kearney, Jr. and Peter Mills. The concert director is Kimille Howard.

The Oscar Micheaux Suite is inspired by the life and work of Oscar Micheaux, America’s first major Black filmmaker. Micheaux’s groundbreaking films focused on contemporary Black life in the first half of the 20th century, racial relationships, and the struggle of African Americans trying to achieve success. He sought to create films that would counter white portrayals of African Americans, and used the emerging art form of silent film to push back against the racism of early Hollywood, representing stories from Black experience. The Oscar Micheaux Suite aims to illuminate his legacy – but also spark dialogue about the history of America’s ongoing struggle for racial equality, including representation on stage.

“Oscar Micheaux deserves to be remembered. His legacy continues to provide inspiration, and is a major influence on cinema and American entertainment,” said lyricist Jesse L. Kearney, Jr.

The Oscar Micheaux Project is honored to have been selected for a developmental residency at the 2022 Johnny Mercer Foundation Writers Grove at Goodspeed Musicals, one of the premier writers’ residencies in the nation. The JMF Writers Grove at Goodspeed provides a sanctuary for composers, lyricists, and librettists to embark on new musical theater work in an environment rich with creative energy.

Composer Alphonso Horne was awarded a 2022 Individual Artists Composer Commission by the New York State Council on the Arts, to continue the development of the score and orchestrations for this original jazz musical. NYSCA’s Individual Artists Program venerates the power of the individual by supporting composers, theatre artists, and film and media makers, enabling them to successfully realize their visions, and is made possible by support from Governor Kathy Hochul and the New York State Legislature.

Lia Chang is a Chinese-American actor, a multi-media content producer, an award-winning filmmaker, and a photo activist and documentarian, who lifts up and amplifies BIPOC communities and artists and the institutions that support them.

Lia moved to New York from her home in San Francisco when she was 17 years of age and made her stage debut as Liat in a national tour of South Pacific with Barbara Eden and Robert Goulet. She spent many years working extensively Off-Broadway, including Signature Theatre’s revival of Sam Shepard’s Chicago. Her film work includes Wolf, New Jack City, A Kiss Before Dying, King of New York, Big Trouble in Little China, and The Last Dragon. The decades of being viewed by others through the narrow lens of “Asian actor” in the industry brought Lia to a turning point, and she picked up her camera, determined to create awareness by documenting the work and the lives of her BIPOC colleagues, resulting in the creation of thousands of photographs and pieces of video. Her photo archives are housed in the AAPI collection in the Library of Congress’ Asian Reading Room under “Lia Chang Theater Portfolio collection,1989-2011” and in the “Lia Chang Photography Collection” in The Billy Rose Theatre Division of the New York Public Library.

Lia’s awards include the 2000 OCA Chinese American Journalist Award and the 2001 AAJA National Award for New Media. She is also an AAJA Executive Leadership Graduate, a Western Knight Fellow at USC’s Annenberg College of Communications for Specialized Journalism on Entertainment Journalism in the Digital Age, a National Press Photographers Association Visual Edge/Visual Journalism Fellow at the Poynter Institute for New Media, and a Scripps Howard New Media Fellow at the Columbia Graduate School of Journalism.

Lia is honored to have worked with Prospect Theater Company on a shared mission of lifting up BIPOC theater artists and creating a more diverse and inclusive musical theater canon. A retrospective of Lia’s photographs will be on view at the Museum of the City of New York later this year, documenting her BIPOC colleagues and contemporaries in the performing arts, which will include photos of Prospect Theater Company artists at work. www.liachang.com, www.liachangphotography.com