Tony, Grammy and Emmy award winning Hadestown star André De Shields is a 2022 MAC Award nominee in the category of Celebrity Artist for his latest theatrical concert, Black By Popular Demand: A Musical Meditation On How Not To Be Eaten By The Sphinx.

Others nominated in the Celebrity Artist category include Norm Lewis for (There’s No Place Like) Home for the Holidays at Feinstein’s/54 Below, Lillias White for her concert at The Green Room 42, Billy Stritch for Billy’s Place at Birdland and Natalie Douglas for her series of Best of Tributes concerts and more.

The Manhattan Association of Cabarets is presenting the 36th Annual MAC Awards on Tuesday, April 12 at 7:00 pm at Peter Norton Symphony Space in New York.

De Shields will receive a 2022 NYU Distinguished Alumni Award on April 1. He recently received the 2021 BroadwayWorld Cabaret Award in the category of Best Show, Celebrity, for his latest theatrical concert, Black By Popular Demand: A Musical Meditation On How Not To Be Eaten By The Sphinx, which debuted at Feinstein’s/54 Below in New York and at The Cabaret in Indianapolis in August.

The entire production of Black By Popular Demand: A Musical Meditation On How Not To Be Eaten By The Sphinx was conceived, written and directed by André, featuring additional material by Murray Horwitz, music direction by Sean Mayes on piano, and percussion by Rudy Bird. The featured vocalists are Kimberly Marable, Lori Tishfield and Freida Williams. The creative team also includes Costume Design by Christina Cocchiara, Celebratory Umbrellas by Brendan McCann, and Headdresses by Debra Scotti.

Broadway World Cabaret and Concert editor Stephen Mosher writes in his Best of 2021 feature article, “André De Shields: BLACK BY POPULAR DEMAND – Feinstein’s/54 Below: Unquestionably the most theatrical, outrageous, and thought-provoking show of the season, Black By Popular Demand was Tony Award recipient de Shields’ musical and socio-poetic comment on the state of the world, and his point of view as a black, queer, and fabulous man and artist. The show had a lot to unpack, and de Shields employed a full cast of musicians and musical storytellers to help him with the task, even presenting some musical material penned by his own hand. This was art, storytelling, and theater at its most innovative, fascinating, and entertaining.”

BWW Feature: The Best of 2021 Cabaret, Club, and Concert

In the program notes De Shields shared, “I am an Artist. Artists possess creative muscle that grows both stronger and more supple the greater the challenging conundrum. That said, throughout the preceding seventeen months I have imagined myself as Oedipus during his mythic journey. When he came upon the city of Thebes–where his destiny would rise up to meet him–unbeknownst to him, he had been metamorphosed into an ambassador, representing the Family of Man, before the Massive Sphinx, who would pose the most inscrutable of all riddles. The riddle was asked of any who wished to enter Thebes. If you could answer the riddle, you were granted entry, but if you could not answer the riddle, the Sphinx would eat you. Now, substitute the COVID pandemic for the Sphinx. Still, nobody has the answer. What I have is a pandemic diary, and its entries have inspired me to create Black By Popular Demand: A Musical Meditation On How Not To Be Eaten By The Sphinx. I am accompanied on this journey by the following members of the Family of Man: photographer/archivist Lia Chang, production supervisor Samuel-Moses Jones, co-writer Murray Horwitz, vocalists Kimberly Marable, Lori Tishfield and Freida Williams, percussionist Rudy Bird, and musical director/pianist Sean Mayes. We are because you are.”

Congrats to all of the nominees!! 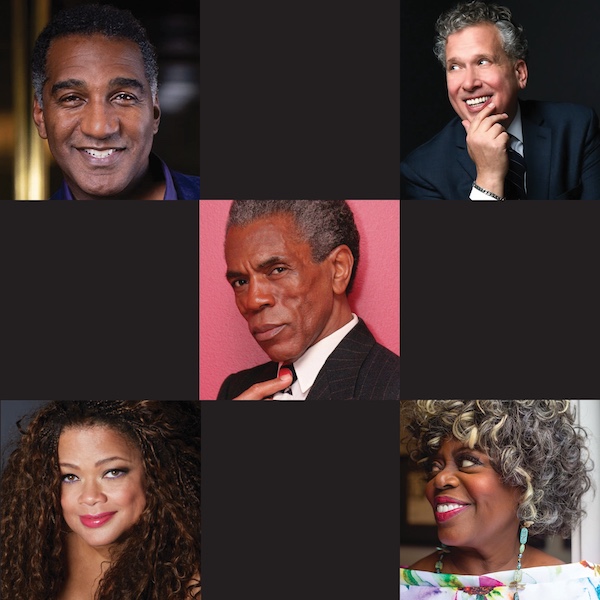 The MAC Awards ceremony is produced by Michael Kirk Lane and directed by Lennie Watts, with musical direction by Yazuhiko Fukuoka. The event is open to the public. Tickets are available at www.symphonyspace.org/events/vp-36th-mac-awards. For additional information, visit www.MACnyc.com.

Louharry.com: Thoughts on “Andre De Shields: Black by Popular Demand, A Musical Meditation on How NOT To Be Eaten By The Sphinx”

Bistro Awards Club Review: André De Shields’ “Black by Popular Demand (A Musical Meditation on How Not To Be Eaten by The Sphinx)”

Theater Pizzazz André De Shields Shines His Light at 54 Below

Broadwayworld: Photos: Inside Andre De Shields’ BLACK BY POPULAR DEMAND At Feinstein’s/54 Below

Opening Night at Feinstein’s/54 Below of André De Shields’ “Black By Popular Demand: A Musical Meditation On How Not To Be Eaten By The Sphinx”; Live Performances Continue through Aug. 7, with an additional Live Stream on Aug. 7

BWW Review: Andre De Shields Takes 54 Below Audience To Church And Back With BLACK BY POPULAR DEMAND

Broadwayworld: Video: In Rehearsal For André De Shields: BLACK BY POPULAR DEMAND at Feinstein’s/54 Below

Lia Chang loves to tell stories that are diverse and inclusive – as an actor, a multi-media content producer, award-winning filmmaker, and a performing arts photographer and documentarian. Photo archives: Lia Chang Theater Portfolio collection,1989-2011, housed in the AAPI collection in the Library of Congress’ Asian Reading Room; Lia Chang Photography Collection in The Billy Rose Theatre Division of the New York Public Library. Awards: 2000 OCA Chinese American Journalist Award, the 2001 AAJA National Award for New Media. Lia is an AAJA Executive Leadership Graduate (2000), a Western Knight Fellow at USC’s Annenberg College of Communications for Specialized Journalism on Entertainment Journalism in the Digital Age (2000), a National Press Photographers Association Visual Edge/Visual Journalism Fellow at the Poynter Institute for New Media (2001), a Scripps Howard New Media Fellow at the Columbia Graduate School of Journalism (2002), and a National Tropical Garden Environmental Journalism Fellow (2003). A co-founder of Bev’s Girl Films, Lia makes films that foster inclusion and diversity on both sides of the camera. She stars in and is the Executive Producer for the indie films Hide and Seek (AA Film Lab’s 2015 72 Hour Shootout Best Actress Nomination), Rom-Com Gone Wrong, and When the World Was Young (2021 DisOrient Film Audience Choice Award for Best Short Narrative). Lia has also appeared in the films Wolf, New Jack City, A Kiss Before Dying, King of New York, Big Trouble in Little China, and The Last Dragon. Along with an extensive career in Off-Broadway productions, favorite stage credits include her debut as Liat in a national tour of South Pacific with Barbara Eden and Robert Goulet and playing Joy in Signature Theatre’s revival of Sam Shepard’s Chicago. www.liachang.com, www.liachangphotography.com