On the first day of the Lunar New Year, I headed to Sara D. Roosevelt Park in New York Chinatown to usher in the Year of the Tiger at Better Chinatown USA’s 24th New Year Firecracker Ceremony & Cultural Festival.

Mayor Eric Adams and many other local officials spoke at the Year of the Tiger festivities, which featured dragon and lion dancers, singers, and traditional dancers. Thousands of firecrackers were set off to ward off the evil spirits.

“This is an amazing community and I am so happy to be here to celebrate the Year of the Tiger,” said Mayor Adams to the hundreds who turned out to celebrate the new year. It shows us the strength and the resiliency and endurance as we move through COVID, as we move through crime, as we open our economy. I’m recommitted more than ever, to make sure my AAPI community is safe in the city of New York as we end the violence against this community, we stand united.”

The Lunar New Year is a fifteen day celebration. The actual date is determined by the Chinese lunar calendar and falls in late January or early February. The celebrations last for 15 days, although today, many families celebrate for five. Since the New Year’s festival traditionally marks the beginning of the planting season in China, a major character is a dragon, bringer of rain and good luck.

Our next stop was Joe’s Shanghai to feast on two of my favorite things – crab and pork soup dumplings (Xiaolongbao) and Peking duck.

Lia and Doualy at Joe’s Shanghai in New York Chinatown. 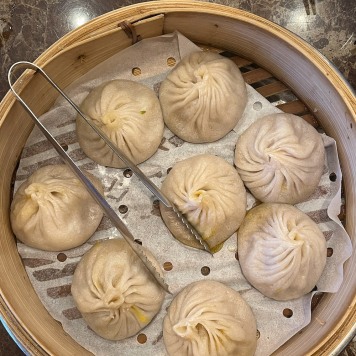 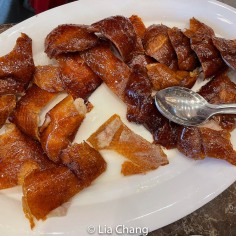 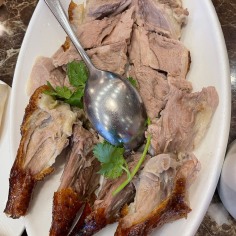 Lion dancers from the Chinatown Community Young Lions came into the restaurant to the delight of our fellow diners to bring good fortune and chase away evil spirits. The lion dance is one of the most important traditions at Chinese New Year. It is performed to bring prosperity and good luck for the upcoming year. We followed them as they performed for the shops, restaurants and associations on Pell Street, Mott Street and Bayard Street. 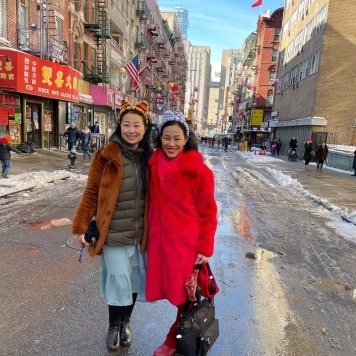 Our final stop was Yu and Me, the first female owned Asian-American bookstore in New York located at 44 Mulberry St. It was the perfect place to relax after our fun filled day in the streets of Chinatown. Founder & Owner Lucy Yu’s focus is on strong, diverse voices of our community, with a highlight on immigrant stories. We had coffee in the Red Room nook at the back of the shop. Looking forward to a return visit to check out the full collection.

Doualy Xaykaothao at Yu and Me Books in New York Chinatown on February 1, 2022. Photo by Lia Chang 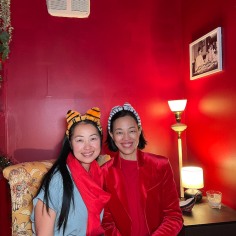 Doualy Xaykaothao and Lia Chang at Yu and Me Books in New York Chinatown on February 1, 2022.

Lia Chang at Yu and Me Books in New York Chinatown on February 1, 2022. Photo by Doualy Xaykaothao

The traditional Chinese almanac (known in Cantonese as Tong Sing and Mandarin as Huang Li ) is a centuries-old repository of cultural information, from household tips to general medical remedies. But what has made it a mainstay in Chinese homes are its regular predictions of which periods are auspicious or ominous for a wide range of daily pursuits. Authors Joanna C. Lee and Ken Smith translate and decode the almanac’s predictions with daily listings for 2022, the Year of the Tiger.

This year’s almanac is extra special: the cover art is by none other than Kam Mak, the artist behind the previous 12-year run of Lunar New Year postage stamps, author and illustrator of My Chinatown among many other books, and former Pearl River artist-in-residence. Learn more about what the cover means. Click here to purchase.

Joanna C. Lee is a recovering pianist with a doctorate in musicology from Columbia University. An active translator and interpreter, she has served such luminaries as former US President Jimmy Carter, film directors Luc Besson and Peter Greenaway, and Hong Kong action star Jackie Chan.

Ken Smith writes about Asian arts and culture for the Financial Times and other publications. He is the author of Fate! Luck! Chance! …the Making of The Bonesetter’s Daughter Opera. He speaks Chinese fluently, in many different dialects.

The authors divide their time between Hong Kong and New York and have been artistic advisors to a wide array of cultural projects, including David Henry Hwang’s Broadway play Chinglish and Kung Fu, a musical based on the life of Bruce Lee for New York s Signature Theatre. They used the almanac to set their wedding date.

Enhance your experience by attending the entire Gala evening, including a pre-concert reception and a post-concert seated dinner with the artists. The Gala is a fundraising event for the New York Philharmonic. To purchase Gala tables or tickets, please contact specialevents@nyphil.org.

The DNC AAPI Caucus is hosting a virtual Lunar New Year celebration on Thursday, Feb. 10, at 7pm ET / 4pm PT to welcome the Year of the Tiger. The event is hosted in partnership with NextShark, a leading AAPI-focused media company and produced by Enfranchisement, and will be hosted and co-streamed on the DNC YouTube channel and NextShark’s Facebook page.

CHINATOWN LION DANCES
Feb 11 – Welcome to Chinatown and New York Chinese FreeMasons Athletic Club have partnered up to bring free lion dances to Manhattan Chinatown from 6 to 7pm, starting at Jing Fong then to Pasteur and Uncle Lou

SUPER SATURDAY LION DANCE PERFORMANCES
Feb 12 – Begins 12pm throughout Manhattan Chinatown, lion and dragon dance troupes will move through the neighborhood to show off their moves and ward off evil spirits and bring joy to onlookers. Just listen for the drums to know you’re nearby a performance.

Feb 12 – New York Center Cultural Center (NYCCC) will be performing traditional lion dances and ribbon twirling performances in celebration of the New Year at Hudson Yards, 20 Hudson Yards, New York, NY 10001. NYCCC’s performance times are at 1pm, 3pm and 5pm at The Great Room on Level 1. This is a free event.

Lia Chang is an actor, a multi-media content producer, an Award winning filmmaker and co-founder of Bev’s Girl Films, making films that foster inclusion and diversity on both sides of the camera. Bev’s Girl Films’ debut short film, Hide and Seek was a top ten film in the Asian American Film Lab’s 2015 72 Hour Shootout Filmmaking Competition, and she received a Best Actress nomination. Her short film, When the World Was Young, written and directed by Garth Kravits, recently garnered a 2021 DisOrient Film Audience Choice Award for Best Short Narrative. Lia has appeared in the films Wolf, New Jack City, A Kiss Before Dying, King of New York, Big Trouble in Little China, The Last Dragon, Taxman. She stars in and served as Executive Producer for the short independent films Hide and Seek, Balancing Act, Rom-Com Gone Wrong, Belongingness and When the World was Young. She is also the Executive Producer for The Cactus, The Language Lesson, The Writer and Cream and 2 Shugahs. BGF collaborates with and produces multi-media content for artists, actors, designers, theatrical productions, composers, musicians and corporations.

All text, graphics, articles & photographs: © 2000-2022 Lia Chang Multimedia, unless otherwise indicated. All rights reserved. All materials contained on this site are protected by United States copyright law and may not be reproduced, distributed, transmitted, displayed, published or broadcast without the prior written permission of Lia Chang. You may not alter or remove any trademark, copyright or other notice from copies of the content. For permission, please contact Lia at liachangpr@gmail.com