On October 25, my latest adventure with André De Shields was a whirlwind 24 hour trip to Chicago on his day off from Hadestown. Our flight was delayed by 2 1/2 hours due to bad weather in Chicago and we finally checked into the very posh Peninsula Hotel Chicago at 4:45pm.

Everything in the luxurious room is controlled via easy-to-use tablets including the giant television. The fully equipped work desk even has a printer tucked into a desk drawer.

Spacious marble and mirror-filled bathrooms have a separate dressing area.

Phones by the toilet and sink are a novelty, and there’s a small television next to the soaking tub.

The 2021 Sarah Siddons Society Actor of the Year Award Benefit was slated to begin at 7:00pm, so we had a very short turn around to get camera ready. André was resplendent in a reversible sequin silver and black tuxedo jacket with black satin peak lapels, red pocket square, black dress shirt, black and silver striped vest, black trousers with a silver pinstripe, and silver boots. 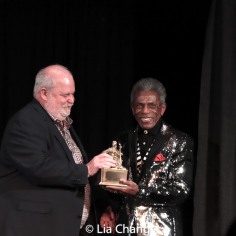 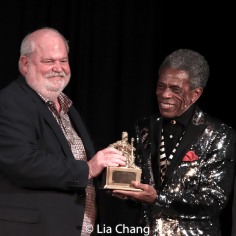 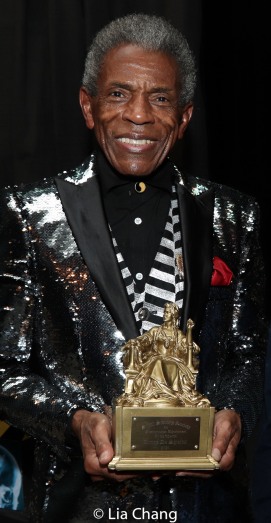 It was a full circle moment for André who began his professional career in the 1969 Chicago production of HAIR at the Shubert Theatre, which lead to a role in The Me Nobody Knows at Civic Stage.

André won his 1st Jeff Award in 1987 for Best Director for The Colored Museum at Victory Gardens Theater, and was the choreographer for Bette Midler and the Harlettes at The Happy Medium.

He appeared at The Goodman in productions of Play On! for which he received his 2nd Jeff Award and a Black Theater Alliance Award; Waiting for Godot; Camino Real; and the world premiere of Mary Zimmerman’s adaptation of Rudyard Kipling’s The Jungle Book, a co-production of the Goodman Theatre and Huntington Theatre Company.

Other Chicago credits include Charles Smith’s The Gospel According to James at Victory Gardens Theater; Poe and Warp! at Organic Theatre Company and the pre-Broadway World Premiere of Gotta Dance at Chicago’s Bank of America Theatre in 2015.

André was a recipient of the 2012 Fox Foundation Fellowship/Distinguished Achievement. He received the 2015 Award for Excellence in the Arts from the Theatre School at DePaul University in Chicago, and his residency culminated at Chicago’s Victory Gardens Theater with his theatrical concert, CONFESSIONS of a P.I.M.P. in  2016, directed by Dennis Začek.

A showstopper at the age of 75, André was the triple-crown winner of the 2019 award season, garnering Tony, Outer Critics Circle, Drama Desk, and Grammy Awards for his universally praised role as Messenger to the Gods, Hermes, in Hadestown.

In an unparalleled career spanning more than 52 years, André has distinguished himself as an actor, director, philanthropist, activist and educator.

André De Shields as The Wiz in 1975. Photo by Martha Swope

André De Shields performing “The Viper’s Drag” in a scene from the Broadway revival of the musical “Ain’t Misbehavin'”. Photo by Martha Swope

André picked up an Emmy for his performance as the Viper in the NBC special Ain’t Misbehavin’, two Tony nominations for Play On! and The Full Monty, and has established himself as a veritable cabaret king — choreographing two shows for Bette Midler and creating six solo theatrical concerts.

André starred in his breakout role, the title character in The Wiz, which ran for more than 1,600 performances and won seven Tony Awards – including best musical.

He starred in the original cast of the Fats Waller musical Ain’t Misbehavin’, a role he later revived, directed, and choreographed for the 30th anniversary run. Andre’s first Tony nomination was for Play On!, a musical adaptation of Shakespeare’s Twelfth Night, featuring Duke Ellington’s music. He received another Tony nomination in 2001 for The Full Monty. André’s other Broadway credits include Impressionism and Prymate.

André embraced cabaret early on. Beginning in the ’70s, he created a string of original shows that performed at such landmark New York clubs as Gypsy’s, the Grand Finale, Reno Sweeney, Les Mouches, the Club at La MaMa, the Horn of Plenty, Greene Street, as well as in Los Angeles, San Francisco, and London. In 1984, he co-wrote, choreographed, co-directed, and starred in the Broadway musical revue André De Shields’ Haarlem Nocturne. More recent cabaret appearances have included Black By Popular Demand: A Musical Meditation on How Not To Be Eaten by The Sphinx at Feinstein’s/54 Below and The Cabaret; Old Dawg; New Tricks at Lincoln Center’s American Songbook Series in New York, at Old School Square’s Crest Theatre in Delray Beach, Fl. and Aventura Arts & Cultural Center; Black By Popular Demand at Joe’s Pub, and I Put A Spell On You at Laurie Beechman Theatre in New York. He is a recipient of the 2018 Bob Harrington Life Achievement Bistro Award. 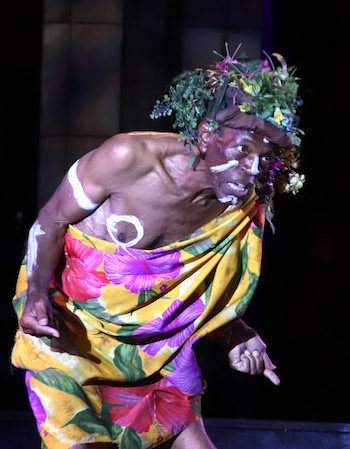 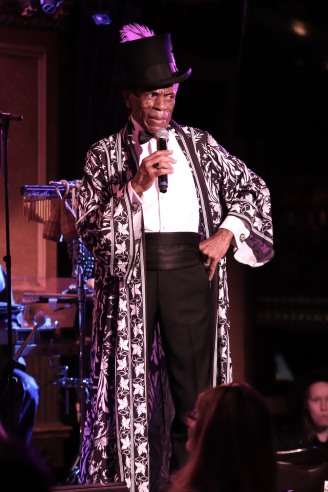 André De Shields in his theatrical concert, Black By Popular Demand: A Musical Meditation on How Not To Be Eaten by The Sphinx at Feinstein’s/54 Below. Photo by Lia Chang

New York Senator Brad Hoylman presented Mr. De Shields with a Senate Proclamation on April 8th, 2021 proclaiming the day “André De Shields Appreciation Day”. The surprise proclamation was arranged by producer Tom D’Angora to honor the extensive charity work and activism, along with the public appearances, Mr. De Shields has done for the community this year. 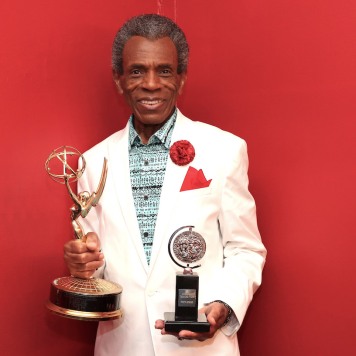 He received the Key to the City of Baltimore from Mayor Bernard C. “Jack” Young on August 19 2019. Other accolades include the 2018 Off Broadway Alliance Legend Award, the 2015 Award for Excellence in the Arts from the Theatre School at DePaul University in Chicago, the 2009 National Black Theatre Festival’s Living Legend Award and the 2007 Village Voice Obie Award for Sustained Excellence of Performance. His film and TV roles include Keys, who first appeared in a 2014 episode of “Law and Order: Special Victims Unit.” He has also appeared on “Law and Order” twice, as Dr. Elvin Simmonds (Custody,1996) and Mr. Miller (Cost of Capital, 2006); Dale Rustin on NBC’s “New Amsterdam”; Anton Ego in Ratatouille: The TikTok Tok Musical, the Algebra Tutor in “John Mulaney & The Sack Lunch Bunch”  on Netflix; Chubby in “Katy Keene” on the CW; and Wyndham on “Almost Family.”

He stars in Foxing’s new music video, Draw Down the Moon, and can be heard on the podcasts Live From Mount Olympus as Hermes and One Speckled Hen. He can next be seen as Gavin Plimsoll in Charles Busch and Carl Andress’ comedy film, The Sixth Reel. De Shields is a proud member of AEA, SAG-AFTRA, and SDC. andredeshields.com

The 2021 Sarah Siddons Society Actor of the Year Award Benefit was produced by Board Member and long-time Chicago event producer Denise McGowan Tracy.

The event was hosted by Daryl D. Brooks, producing managing director of Black Ensemble Theater, and featured terrific performances of musical selections from some of André’s iconic Broadway shows Ain’t Misbehavin’, The Wiz, HAIR, and Hadestown, in addition to The Goodman Theatre’s production of The Jungle Book, by some of Chicago’s most talented rising stars- vocalists Darilyn Burtley, Melanie Loren, Gabriel Mudd, and Juwon Tyrel Perry.

David Fiorello served as Musical Director and played the piano. He was joined by Jackson Jay Kidder on Bass, Justin Akira Kono on Drums, Kimberly Lawson on Violin, Kelan M. Smith on Guitar and Banjo, and Greg Strauss on Trumpet. 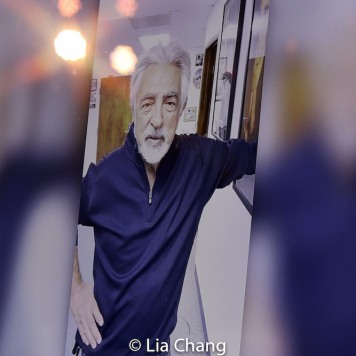 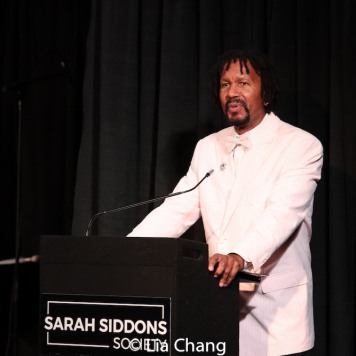 All Proceeds Benefit the Sarah Siddons Society Scholarship Program. Since its inception in 1952, the mission of the Society has been to fund scholarships to promising theater arts students at top Chicago area universities including; The Theater Department, Columbia College; The Theatre School at DePaul University; Chicago College of Performing Arts at Roosevelt University and Northwestern University School of Communications. 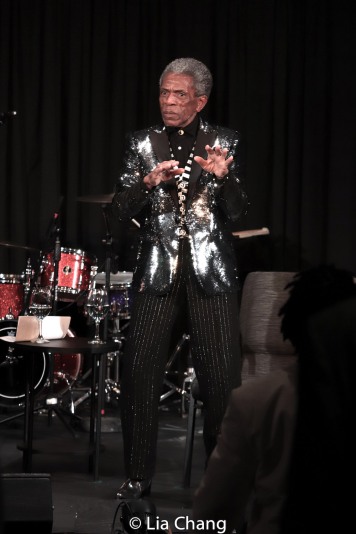 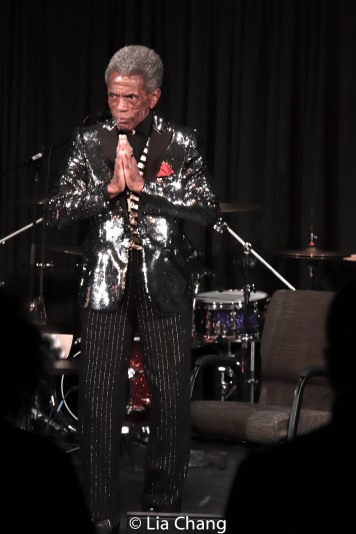 Sarah Siddons Society is grateful to the following sponsors for their support:

GOLD
Martin Balogh and Carl Stimson
Any and Marcie Stein

The Peninsula Chicago, in honor of Breast Cancer Awareness Month, has a “Remembrance Tree” available for guests to write the names of cancer survivors or memories of loved ones. I filled out tags for my sister Marissa Chang-Flores, my Auntie Pauline Chang and my late grandmother, Leatrice Chang.

I am looking forward to afternoon tea at The Peninsula Chicago on my next visit.

Lia Chang is an actor, a multi-media content producer and co-founder of Bev’s Girl Films, making films that foster inclusion and diversity on both sides of the camera. Bev’s Girl Films’ debut short film, Hide and Seek was a top ten film in the Asian American Film Lab’s 2015 72 Hour Shootout Filmmaking Competition, and she received a Best Actress nomination. BGF collaborates with and produces multi-media content for artists, actors, designers, theatrical productions, composers, musicians and corporations. Lia has appeared in the films Wolf, New Jack City, A Kiss Before Dying, King of New York, Big Trouble in Little China, The Last Dragon, Taxman. She stars in and served as Executive Producer for the short independent films Hide and Seek, Balancing Act, Rom-Com Gone Wrong, Belongingness and When the World was Young (2021 DisOrient Film Audience Choice Award for Best Short Narrative). She is also the Executive Producer for The Cactus, The Language Lesson, The Writer and Cream and 2 Shugahs. Click here for Cre8sianproject.com’s latest profile on Lia.