Second Stage is presenting the Off-Broadway Premiere of Rajiv Joseph’s Letters of Suresh starring Ali Ahn, Thom Sesma, Ramiz Monsef and Kellie Overbey, with May Adrales at the helm. Ms. Overbey also appeared in Joseph’s play, Animals Out of Paper, which is a companion piece to Letters of Suresh that had its world premiere in Second Stage’s Uptown Series in 2008.

In Letters of Suresh, playwright Rajiv Joseph reveals intimate mysteries through a series of letters between strangers, friends, daughters, and lovers – many with little in common but a hunger for human connection. Sending their hopes and dreams across oceans and years, they seek peace in one another while dreaming of a city once consumed by the scourge of war. A companion piece to Joseph’s play Animals Out of Paper, Letters of Suresh is the latest work from the Pulitzer Prize-short listed playwright hailed as “wonderfully daring, imaginative, and compassionate” (The New York Times). 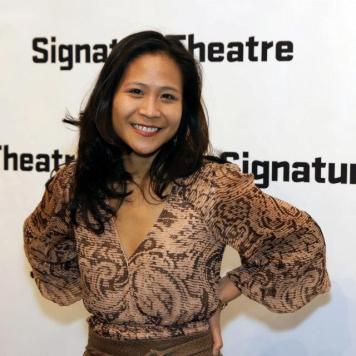 May Adrales. Photo by Lia Chang

Letters of Suresh is the recipient of an Edgerton Foundation New Play Award. The production is supported by a grant from the Blanche & Irving Laurie Foundation. The play was commissioned with support from the Time Warner Foundation.

Tickets to Letters of Suresh are on sale now via www.2ST.com. $30 tickets are available to people age 30 and Under with valid ID. Health & Safety Protocols for Second Stage Theater as of August 1, 2021 For the health and safety of our audience, employees, cast and crew please be advised of the following protocols: to be permitted to enter any Second Stage Theater venue (The Tony Kiser Theater, The Hayes Theater, The McGinn/Cazele Theater), guests will need to be fully vaccinated (as defined below) with an FDA or WHO authorized vaccine. Evidence of the vaccination will be required at the time of entry along with a valid ticket for the current production. Other health & safety requirements may be required in addition to the vaccine.

Guests may display proof on a smartphone or present a physical copy. New York State residents, or anyone who received a COVID-19 vaccine in New York State, may present proof through the use of the Excelsior Pass or any other CDC-approved digital app. The only exceptions are guests under the age of 12, who must be accompanied by an adult that meets the above vaccination requirements or guests who need reasonable accommodations due to a medical exception or a sincerely held religious belief. For guests who are not able to be vaccinated for one of the reasons listed above, they must provide proof one of the following instead of evidence of vaccination: a negative COVID-19 antigen test taken within 6 hours of the performance start time, or a negative COVID-19 PCR test taken within 72 hours of the performance start time. In addition to proof of vaccination, all guests 18 years or older must also present a government-issued photo ID such as a driver’s license or passport. Guests younger than 18 may use a government-issued photo ID or school photo ID. Guests under 12 must be accompanied by an adult who meets the above requirements. Entry will be denied for guests who do not provide the documentation as required above. Masks are required for all guests, regardless of vaccination status. Masks must be worn at all times while visiting the venue except when eating or drinking in designated areas. All masks must completely cover the nose and mouth and comply with the CDC guidelines for acceptable face coverings.

Lia Chang is an actor, a multi-media content producer, an Award winning filmmaker and co-founder of Bev’s Girl Films, making films that foster inclusion and diversity on both sides of the camera. Bev’s Girl Films’ debut short film, Hide and Seek was a top ten film in the Asian American Film Lab’s 2015 72 Hour Shootout Filmmaking Competition, and she received a Best Actress nomination. Her short film, When the World Was Young, written and directed by Garth Kravits, recently garnered a 2021 DisOrient Film Audience Choice Award for Best Short Narrative. Lia has appeared in the films Wolf, New Jack City, A Kiss Before Dying, King of New York, Big Trouble in Little China, The Last Dragon, Taxman. She stars in and served as Executive Producer for the short independent films Hide and Seek, Balancing Act, Rom-Com Gone Wrong, Belongingness and When the World was Young. She is also the Executive Producer for The Cactus, The Language Lesson, The Writer and Cream and 2 Shugahs. BGF collaborates with and produces multi-media content for artists, actors, designers, theatrical productions, composers, musicians and corporations.