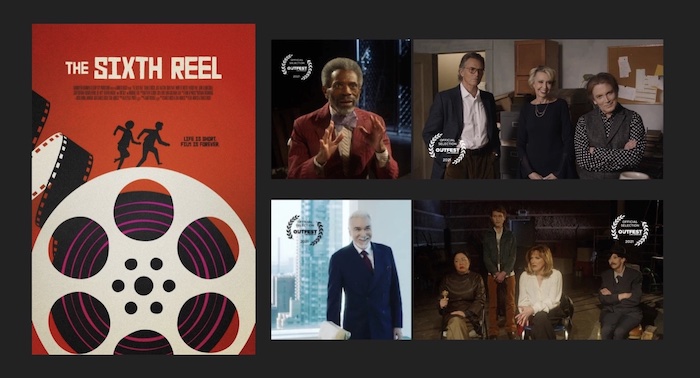 Outfest Los Angeles extends with an Encore of the festival through midnight on Wednesday, August 25. Catch the winners below streaming at OutfestLA2021.com.

Outfest presented the World Premiere of The Sixth Reel, the latest creation from the legendary Charles Busch (Psycho Beach Party, Die, Mommie, Die!), and Carl Andress as the Special Tribute Centerpiece on August 19 at DGA 1, 7920 Sunset Blvd, LA, CA. This screening began with a memorial tribute to producer and Outfest alum Ash Christian, who passed away during the development of this film in 2020. The film was also available to stream August 20-22.

Co-written and directed with Carl Andress, this hilarious caper stars Busch as Jimmy, an Old Hollywood-obsessed New Yorker who’s one of an extended community of discerning – and extremely catty – movie memorabilia collectors. When the death of a close friend unearths the long-thought lost final reel of a classic Tod Browning horror film, Jimmy and his cohorts each concoct underhanded schemes involving false romances, drag personas….and maybe vampires?…to cash in on a big sale of the film. But can the urge to bring the moviegoing community together with this lost classic prevail over the desire to get rich quick?

“A Special Mention for Ensemble Performance goes to Charles Busch & Carl Andress’ film THE SIXTH REEL for the wackiest and most entertaining ensemble of characters we’ve seen in a while; we had such a wonderful time romping around lower Manhattan with this group of folks.”

Filming took place during the darkest days of the COVID pandemic on sound stages in Upstate New York and on the streets of the Village. Everyone involved felt privileged to escape the gloom and work on a project that celebrates movies, movie lovers and New York City.

Of the film/filming, Busch and Andress shared, “We’re delighted that such an incredible group of talented cast and crew have joined forces to bring this screwball caper comedy to life. This is how it must have felt on the studio lots back in the 1930s, when filming on sound stages was the norm. With everything going on in the world right now, we look forward to offering the viewing public a few laughs. We can’t wait to share The Sixth Reel with you.”

Busch and Andress have a long and celebrated partnership, creating acclaimed comedies Off-Broadway. Their theater collaborations, authored by and starring Busch and directed by Andress, include The Divine Sister, The Tribute Artist and The Confession of Lily Dare. The pair also collaborated on the film A Very Serious Person, which won an honorable mention at the Tribeca Film Festival. The Sixth Reel is produced by Cranium Entertainment (founded by the late Ash Christian) and Derby City Productions. The film’s Producers are Alex Peace-Power and Jamie Buckner, with Charles Busch and Carl Andress Executive Producing. 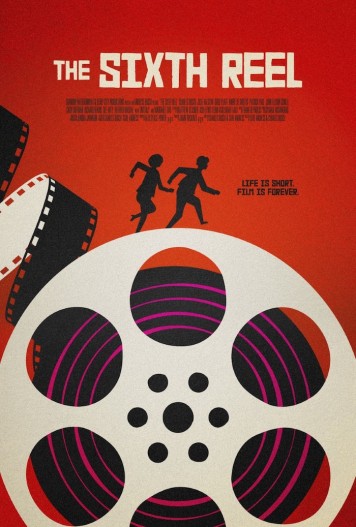 The nation’s leading LGBTQ festival ran from August 13th to August 22nd.  The 2021 Outfest Los Angeles LGBTQ Film Festival hosted its closing night at the iconic Orpheum Theatre with a screening of Fanny: The Right to Rock – a film about the first female rock band to release an album with a major label- as well as an Awards Ceremony to honor award-winning actor Elliot Page who received the prestigious Outfest Annual Achievement Award and Academy Award-winning actress Octavia Spencer who received the prestigious Outfest Annual James Schamus Ally Award.

New this year, Outfest Los Angeles collaborated with IMDb (www.imdb.com), the world’s most popular and authoritative source for movie, TV and celebrity content, marking the first time a festival has used IMDb fan ratings to select its official audience award-winning titles. IMDb customer ratings, which help entertainment fans discover a new generation of LGBTQ+ stories and storytellers on a year-round basis, helped determine some of the breakout films at this year’s festival that most resonated with audiences. Among other prizes and recognition, eligible Outfest Los Angeles winners received a one-year membership to IMDbPro (www.imdbpro.com), the essential resource for entertainment industry professionals, to continue advancing their careers.

“The incredible response from this year’s festival has been beyond heart-warming and rewarding for our board, staff and volunteers to watch as thousands of our members, fans, filmmakers and audiences participated in this year’s festivities from around the world.  As we come together a final time to celebrate our winners from 2021 – I want the world to know that Outfest the organization is committed to continuing our fight to improve accessibility, to continue expanding our visibility and to identify where new opportunities lie for us.  As I said at our Opening Night Gala – To my trans, intersex and non-binary siblings, we see you.  To my black lesbians, trans and gay men – we hear you, to my Latinx primos – we stand by you – to my asian queer family – we will do better –  to my disabled storytellers and dreamers – we won’t leave you behind – for my indigenous artists and visionaries – we will never forget – to my middle eastern colleagues – we will climb with  you – and to all of those generations before us who knocked down those first blocks – we can never repay you,”  commented Outfest Executive Director Damien Navarro.

THIS IS JESSICA, Directed by Andrea Meyerson

AND THEN, Directed by Jenn Ravenna Tran

NO STRAIGHT LINES: THE RISE OF QUEER COMICS, Directed by Vivian Kleiman

The Documentary Feature Grand Jury Prize goes to NO STRAIGHT LINES: THE RISE OF QUEER COMICS for preserving an important history of the evolution of queer creators in comics. This film highlights the often invisible work of building community through the creative process, and has the potential to unite queer community across generations through learning our shared history and the lines that can be drawn to unite us.

The jury would like to acknowledge two standout documentary features – SEDIMENTS and NORTH BY CURRENT –  that lean into the messiness of relationships and life journeys with their artistic risk-taking, aspirations, and unexpected storytelling impact.

The U.S. Narrative Feature Grand Jury Prize goes to FIRSTNESS for its fresh and compassionate perspective on a community of folks that live on the periphery of mainstream society. This immersive film had such a strong point of view, great cinematography, and a beautifully cohesive cast.

Pooya Mohseni in SEE YOU THEN

The Grand Jury Prize for Best Performance in a U.S. Narrative Feature goes to Pooya Mohseni in SEE YOU THEN for an excellent portrayal of a character who simultaneously takes responsibility for their past while also honoring their true self.

The Grand Jury Prize for Best Screenplay in a U.S. Narrative Feature goes to Wes Hurley for POTATO DREAMS OF AMERICA for his unique non-traditional portrayal of a gay immigrant’s transition to America and his relationship to his mother.

A Special Mention for Ensemble Performance goes to Charles Busch & Carl Andress’ film THE SIXTH REEL for the wackiest and most entertaining ensemble of characters we’ve seen in a while; we had such a wonderful time romping around lower Manhattan with this group of folks.

The International Narrative Feature Grand Jury Prize goes to A DISTANT PLACE for exploring and expanding our notions of queer fatherhood with a narrative so wholly rooted in its bucolic rural community.

A Special Mention goes to the inimitable Cloris Leachman for a reminder of the genius of a legendary performer whose wit remained as sharp as ever and who so effortlessly mined the heartbreak and melancholy of an unforgettable grandma.

LOVE, SPELLS, AND ALL THAT, screenplay by Ümit Ünal, for its playful and enchanting approach to long-lost love whose twists and turns kept us guessing throughout.

Nell Barlow for SWEETHEART for her ability to emote even under a pair of sunglasses and a bucket hat, and for crafting a distinctly empathetic and really funny performance that’s a brilliant calling card for a long career ahead.

The Grand Prize for Best International Narrative Short Film goes to SQUISH for its brilliant combination of black humor and a blisteringly satirical take on bourgeois comforts, and its outrageous ability to shock audiences into horrified laughter.

A Special Mention goes to PRIVATE PHOTOS for its empathetic portrait of a relationship on the rocks and its incisive use of sex to portray its characters’ innermost desires.

The Grand Prize for Best Documentary Short Film Award goes to NARCISSISTER BREAST WORK for a film that gets under your skin as a way of fighting back against the harm that society inflicts on all of us around our bodies and asks the audience to question their reaction to it and the impact of why they are.

A Special Mention goes to F1-100, a visually masterful film that feels far ahead of its time. Our recognition is honoring not only the creativity of the film itself, but also the filmmaker who we really believe is someone to watch.

The Grand Jury Prize for Best U.S. Narrative Short goes to GIRLS & THE PARTY for its nuanced and carefully handled evocation of queer girlhood.

THE RECORDER, Directed by Justine Lupe

The Special Mention goes to THE RECORDER for its brilliant comedic performances.

The 2021 Programming Award for Emerging Talent goes to Joseph Sackett for HOMEBODY, an assured directorial feature debut that inventively and sensitively explores gender identity with nuance and displays his mastery of the craft, balancing a tight script, character work, a whimsical score, comedic timing, emotional notes, and a handsome visual palette.

The 2021 Programming Award for Freedom goes to Whitney Skauge and Terence Smith for their collaboration on the short documentary THE BEAUTY PRESIDENT, a reflection on the legacy of a young, black drag queen who, at the height of the AIDS crisis, brazenly ran against George H. W. Bush for president on the Queer Nation Party Ticket in 1992.

The 2021 Programming Award for Artistic Achievement goes to Bo McGuire for SOCKS ON FIRE for combining lyrical poetic reflections, old VHS footage, intimate interviews, and dramatic reenactments in drag to push the boundaries of non-fiction cinema in a lush Southern Gothic.

Jen Rainin – Filmmaker, AHEAD OF THE CURVE

Em Weinstein – Filmmaker, IN FRANCE MICHELLE IS A MAN’S NAME

Founded by UCLA students in 1982, Outfest is the world’s leading organization that promotes equality by creating, sharing and protecting LGBT stories on the screen. Outfest builds community by connecting diverse populations to discover, discuss and celebrate stories of LGBT lives. For nearly four decades, Outfest has showcased thousands of films from around the world, educated and mentored hundreds of emerging filmmakers, and protected more than 40,000 LGBT films and videos. Outfest Los Angeles LGBT Film Festival is ten days of world-class films, panels, and parties.

Lia Chang is an actor, a multi-media content producer, an Award winning filmmaker and co-founder of Bev’s Girl Films, making films that foster inclusion and diversity on both sides of the camera. Bev’s Girl Films’ debut short film, Hide and Seek was a top ten film in the Asian American Film Lab’s 2015 72 Hour Shootout Filmmaking Competition, and she received a Best Actress nomination. Her short film, When the World Was Young recently garnered a 2021 DisOrient Film Audience Choice Award for Best Short Narrative. Lia has appeared in the films Wolf, New Jack City, A Kiss Before Dying, King of New York, Big Trouble in Little China, The Last Dragon, Taxman. She stars in and served as Executive Producer for the short independent films Hide and Seek, Balancing Act, Rom-Com Gone Wrong, Belongingness and When the World was Young. She is also the Executive Producer for The Cactus, The Language Lesson, The Writer and Cream and 2 Shugahs. BGF collaborates with and produces multi-media content for artists, actors, designers, theatrical productions, composers, musicians and corporations.