Tony, Emmy and Grammy winning star André De Shields will make his highly anticipated Feinstein’s/54 Below solo debut with a stylish new show that showcases the wit, elegance, and charm that the master entertainer has become known for. A showstopper at the age of 75, De Shields was the triple-crown winner of the 2019 award season, garnering Tony, Outer Critics Circle, and Drama Desk Awards for his role as universally praised role as the messenger to the gods, Hermes, in Hadestown. Performances are Tuesday, August 3 – Saturday, August 7 at 7pm. Doors open at 5:30pm. Click here for tickets.

In an illustrious career that has spanned more than half a century, De Shields has distinguished himself as an actor, director, and educator. His notable theatrical appearances include roles in the original Broadway productions of The Full Monty (Tony nomination), Play On! (Tony nomination), Ain’t Misbehavin’ (Emmy Award) and the title role in The Wiz. 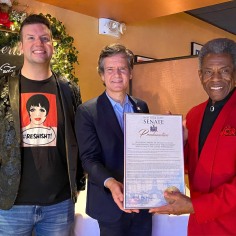 In 2020, he received the 2020 Grammy Award for Musical Theater Album for Hadestown, an Honorary Doctor of Arts Degree from Boston Conservatory at Berklee, the 2020 AUDELCO for Lifetime Achievement and the 2020 Red Bull Theater Matador Award for Excellence in Classical Theater. 2019 honors include The Actors’ Equity Foundation Richard Seff Award, which honors veteran stage actors’ best supporting performances of the year, the Project1Voice Lifetime Achievement Award, the 2019 SAGE Joyce Warshow Lifetime Achievement Award, and The York Theatre Company’s 2019 Oscar Hammerstein Award for Lifetime Achievement in Musical Theatre, among others. He was also inducted into the Theater Hall of Fame. He received the Key to the City of Baltimore from Mayor Bernard C. “Jack” Young in August, 2019. Other accolades include the 8th Annual Off Broadway Alliance Legend Award, the 33rd Annual Bob Harrington Life Achievement Bistro Award, the 2009 National Black Theatre Festival’s Living Legend Award and the 2007 Village Voice Obie Award for Sustained Excellence of Performance. His film and TV roles include Keys, who first appeared in a 2014 episode of “Law and Order: Special Victims Unit.” He has also appeared on “Law and Order” twice, as Dr. Elvin Simmonds (Custody,1996) and Mr. Miller (Cost of Capital,2006); Dale Rustin on NBC’s “New Amsterdam”; Anton Ego in Ratatouille: The TikTok Tok Musical, the Algebra Tutor in “John Mulaney & The Sack Lunch Bunch”  on Netflix; Chubby in “Katy Keene” on the CW; and Wyndham on “Almost Family.” He can be heard on the podcasts Live From Mount Olympus as Hermes and One Speckled Hen. He can next be seen as Gavin Plimsoll in Charles Busch’s  new film, The Sixth Reel. De Shields is a proud member of AEA, SAG-AFTRA, and SDC. andredeshields.com

Feinstein’s/54 Below is committed to the health of its performers, staff, and guests and has created a Safety Plan to ensure safe conditions along with optimum performing conditions. The new policies require that performers, production, kitchen, and dining room staff, as well as all audience members show proof of vaccination to enter the premises. Additionally, the safety protocols, which will include social distancing, temperature checks, and wearing masks when not dining, will be adhered to until such time as official guidance changes.

Capacity will currently be limited to only 80 guests. Tickets for all shows will be sold in pods of 2, 3, or 4 tickets. Unaffiliated parties will not be seated at the same table. Feinstein’s/54 Below has installed improved air circulation and filtering systems as well as added plexiglass barriers between some tables. Based on CDC and New York State guidelines at the time of performance, safety protocols and seating capacity may change and policies may be adjusted as is appropriate. To read or download their Safety Plan, click here.