Along with the increased demand for Asian American and Pacific Islander (AAPI) representation in Hollywood, the AAPI Broadway and theatrical communities are also making their voices heard. CollaborAzian, a new collective of Asian American producers, will present an abridged, virtual performance of the Tony Award-winning musical A Gentleman’s Guide to Love and Murder and will feature and all-Asian cast and crew. The production aims to uplift opportunities for AAPIs in theatre and net proceeds will support StopAAPIHate.org. 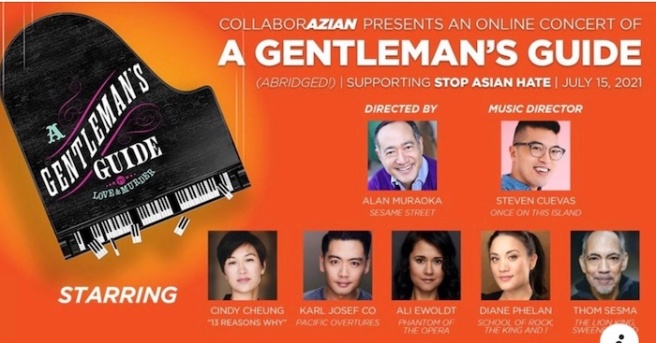 The production will be helmed by theatre and television director Alan Muraoka, who has played Alan, the owner of Hooper’s Store on Sesame Street for the past 23 years. He most recently played Iago in Disney’s Aladdin on Broadway, and starred as the Engineer in Miss Saigon. The all-Asian American cast will star Cindy Cheung (13 Reasons Why), Karl Josef Co (Pacific Overtures), Ali Ewoldt (The Phantom of the Opera, Les Miserables), Diane Phelan (School of Rock, The King and I), and Thom Sesma (The Lion King, Sweeney Todd). Steven Cuevas (Once On This Island) serves as music director.

“The need for representation is not limited to television and film,” says Muraoka. “We are honored to present this story with a fresh perspective and excited to showcase the excellence of Asian American talent in theatre.”

AAPIs have historically been misrepresented and erased on stage. CollaborAzian’s production of A Gentleman’s Guide to Love and Murder aims to redefine the opportunities given to actors of color and put a spotlight on the level of musical talent present in this community.

“We are actively redefining who we are as stage performers and reshape who gets to be considered for roles that we have never been considered for,” adds Muraoka.

The all-Asian American production of A Gentleman’s Guide to Love and Murder will take place on July 15th, 2021 and donations for StopAAPIHate.org are now being accepted. Details of the show will be announced at a later time on the show’s website.

All text, graphics, articles & photographs: © 2000-2020 Lia Chang Multimedia. All rights reserved. All materials contained on this site are protected by United States copyright law and may not be reproduced, distributed, transmitted, displayed, published or broadcast without the prior written permission of Lia Chang. You may not alter or remove any trademark, copyright or other notice from copies of the content. For permission, please contact Lia at liachangpr@gmail.com .