The theater community reunited on March 12, 2021 in Times Square exactly one year to the day since Broadway shut-down for “We Will Be Back,” a special live pop-up experience and commemoration of Broadway’s “lost year.” 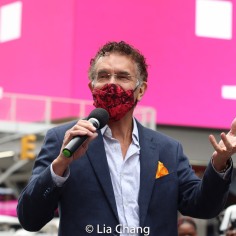 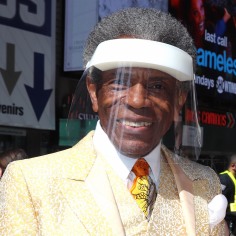 The event aimed to provide a sense of hope as the industry and city move forward from the challenges brought on by the past year, by shining a spotlight on the arts workers who suffered during the theatre’s darkest hours as well as celebrating the sense of community and diversity within the arts environment that mirrors that of New York City itself.

While the arts community has many months ahead before uniting in theatres once again, “We Will Be Back” provided the opportunity to safely and ceremoniously come together on Broadway, live and in-person, for a special one-time-only performance representing a myriad of arts and culture workers, unions, and individuals that comprise the Broadway community.

The event is sponsored by Broadway Cares/Equity Fights AIDS, Kaleidoscope Entertainment, NYCNext, and the Times Square Alliance, executive produced by Blake Ross and directed and produced by Holly-Anne Devlin of Kaleidoscope, with musical direction by Jacob Yates and choreography by Kellen Stancil.

Performance:
“On Broadway” (Presented with support of author George Benson) is performed by Derrick Baskin, Charl Brown, Kelvin Moon Loh, and Joél Pérez and is arranged by Jacob Yates. Watch below: 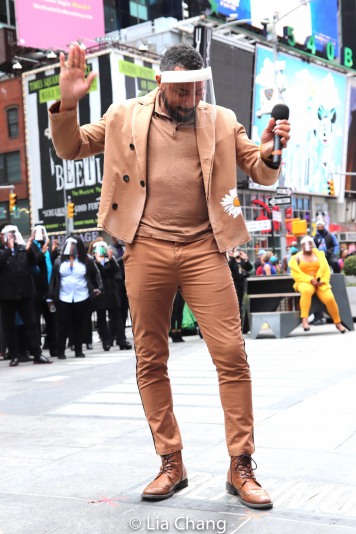 Performance:
“Home” (From “The Wiz” Presented with support of Michael Smalls, son of author Charlie Smalls) is performed by Lilias White, Nikki M. James, Peppermint, and Solea Pfeiffer and is arranged by Jacob Yates. Watch below: 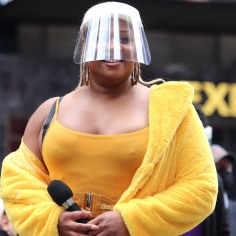 Video: ‘HOME’ Featuring Lillias White, Nikki M. James, Miss Peppermint and Solea Pfeiffer at WE WILL BE BACK

Video: Tamara Tunie Introduces Broadway Inspirational Voices’ Performance of Allen René Louis’ ‘We Will Be Back’ at Broadway Reunion Celebration in Times Square

BD Wong discussed advocacy organizations Be An Arts Hero and the Costume Industry Coalition. Nikkole Salter, representing The Dramatists Guild of America, shared a portion of her letter for arts relief to President Biden and Vice President Harris that Arts workers are essential to America. Watch below:

Costumes from Ain’t Too Proud, Moulin Rouge! The Musical, Six, Phantom of the Opera, and Wicked displayed in and around the performers were built by members of the Costume Industry Coalition, which represents 55 small businesses that make, supply and care for Broadway costumes.

Video: Chita Rivera, Joel Grey and ‘MAGIC TO DO’ with André De Shields, Jackie Cox and the WE WILL BE BACK Company

As the pop-up performance ended, André De Shields, Lillias White & Sahr Ngaujah sang ”New York, New York” at WE WILL BE BACK in Times Square.

The event organizers are collectively responsible for producing dozens of events all over the city during the pandemic including pop ups in the five boroughs and October’s Times Square Event featuring Bernadette Peters and 50 fellow artists singing on the red steps over TKTS in Times Square’s Father Duffy Square.

“We Will Be Back” was supported by New Tradition Media, Clear Channel Outdoor, Our Man In Havana, and Treadwell Park. Masks are designed and donated by Christian Siriano and accessories are donated by H&M.

Theatermania: We Will Be Back: Springtime for Broadway After the COVID Winter

NYtimes: ‘We’ll Be Back,’ Broadway Says, on Shutdown Anniversary

Broadwayworld: Photo Coverage: Go Inside ‘We Will Be Back’- A Broadway Celebration in Times Square!

Playbill: Watch as the Broadway Community Reunites in Times Square, 1 Year Later, for We Will Be Back