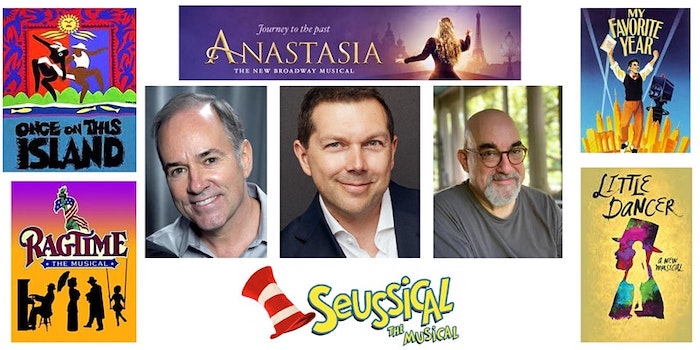 When creating a new musical the close collaboration between composer and orchestrator requires trust, flexibility and a mutual understanding of the creative vision for the work.

Celebrated composer Stephen Flaherty discusses that collaboration with two orchestrators he has worked with multiple times, Doug Besterman and Michael Starobin. Join us as they examine and discuss scores from Once on This Island, Seussical, Anastasia, My Favorite Year and Ragtime (orchestrated by the late Bill Brohn, the subject of last month’s ASMAC-NYC event.) Special attention will be paid to the musical and dramatic demands of opening numbers.

For almost 30 years, Doug Besterman has been active as an arranger, orchestrator, and composer for Broadway theater, film, television and recording. He has been privileged to work with some of the most recognizable names in the industry, including composers Mel Brooks, Alan Menken, Marc Shaiman and Steven Flaherty; recording artists Barbra Streisand and Barry Manilow; and directors Rob Marshall and Susan Stroman.

A veteran of over 25 Broadway shows and over 30 regional and international productions, Besterman won the Tony Award® for Fosse, The Producers, and Thoroughly Modern Millie, and was nominated for The Music Man (2000), How to Succeed in Business, and Bullets Over Broadway; he was also awarded the Drama Desk for The Producers and Thoroughly Modern Millie. His most recent Broadway credits include Charlie and the Chocolate Factory, A Bronx Tale, and Anastasia.

Besterman has also written orchestrations for nearly 30 film and television projects; recent credits include the films Mary Poppins Returns, Aladdin (2019), Beauty and the Beast (2017) and Frozen; and for TV American Housewife, Crazy Ex Girlfriend, and Galavant. Doug just completed music supervision and supervisory orchestration for Schmigadoon, a musical comedy streaming series due to premiere on AppleTV+ in the summer of 2021.

As a composer, Besterman penned the scores for the podcast musicalLittle Did I Know (with lyricists Dean Pitchford and Marcy Heisler), currently available for download on Apple Podcasts; and The Big One-Oh (with lyricist Dean Pitchford), which recently premiered at The Atlantic For Kids in NYC and is available for licensing through Music Theater International. His music has also been recorded by singer Christian Bautista, heard in the films The Punisher, Out of Step and Exit Speed, TV shows Summerland and One Life To Live, in concert with the United States Military Academy Concert Band, and in the musical revue Hats. www.https://www.dougbesterman.com

Our online events are all held on Zoom. A log-on link and password will be sent via email upon completion of your ticket order. Click here to purchase tickets.

All of ASMAC’s events are recorded, and your participation serves as your consent to be part of this recording. ASMAC reserves the right to rebroadcast this recording, as well as to offer it for sale in various media.

The American Society of Music Arrangers and Composers (ASMAC) is a registered non-profit 501(c)(3). Our mission is to promote the arts of music arranging, composition and orchestration within the music and entertainment industry and to the general public. ASMAC presents master classes, online events, scholarships and other programs for professionals, students, the entertainment community, as well as to schools and to the general public. Visit www.asmac.org for more info.