Skip to content
Congratulations to Grant Chang, who has been nominated for a 2021 LA Stage Alliance Ovation Award for Lead Actor in a Play for his role as Wen Chang in Pasadena Playhouse and East West Players’ co-production of Lauren Yee’s The Great Leap, helmed by Tony Award winner BD Wong. Chang received a 2019 Los Angeles Drama Critics Circle Award for Lead Performance for The Great Leap. The Great Leap is the story of an American basketball team in Beijing where the coaches find themselves in a conflict that runs deeper than the strain between the countries, and where a young player’s actions become the accidental focus of attention. Grant Chang made his west coast debut in The Great Leap at Pasadena Playhouse. A native New Yorker, he minored in educational theatre at New York University and also studied acting at HB Studios.  He’s best know to TV audiences for his recurring guest star role as Grant in “Mr. Robot”. His theater credits include Marian Jean at NYTW, Abingdon Theatre Company’s The Nanjing Race,  Red Fern Theatre’s A Shot Away, Mame with Sandy Duncan at Barrington Stage Co. His Television credits include “Mr. Robot,” “Deception,” “The Knick,” “House of Cards,” “DareDevil,” “Law and Order,” “Law and Order Criminal Intent”. His films include Off Jackson Avenue, The Cut Runs Deep, Finding You, Dark Horse, Feel. He is represented by Vanguard Management Group. @hipcatg The other Lead Actor in a Play nominees include Evan Jonigkeit (Witch), Alfred Molina (The Father), Iain Kohn (The Curious Incident of the Dog in the Night-Time), Steven M. Porter (Cant Pay? Don’t Pay!), Michael Manuel (Frankenstein), and Jonathan Nichols (Nowhere on the Border). 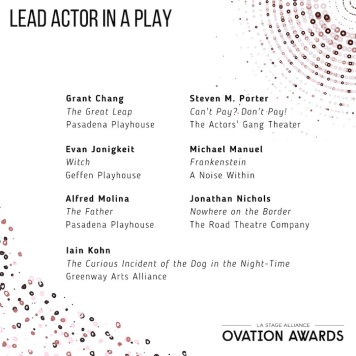 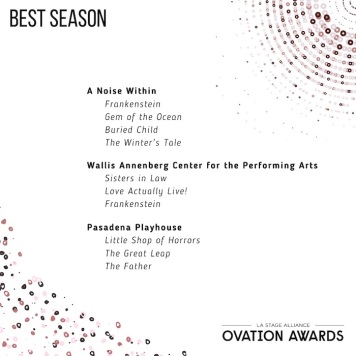 Ovation Honors, which recognizes outstanding achievement in areas that are not among the standard list of nomination categories, have been awarded to Robert Oriol (Music Composition for a Play, Frankenstein, A Noise Within), and Sean Cawelti & Emory Royston (Puppet Design, Miss Lilly Gets Boned, Rogue Machine).

During the abbreviated 2019-2020 voting season, 137 productions were registered for awards consideration by 36 producing organizations, and 174 individual artists were evaluated. Of those productions registered, 40 were ‘Ovation Recommended,’ identified during their runs as scoring in the top quarter of all productions in the Overall Production category. This year’s 303 voters cast a total of 1,400 ballots. The eligibility period ran from September 1, 2019 through March 31, 2020. Lia Chang is an actor, a multi-media content producer and co-founder of Bev’s Girl Films, making films that foster inclusion and diversity on both sides of the camera. Bev’s Girl Films’ debut short film, Hide and Seek was a top ten film in the Asian American Film Lab’s 2015 72 Hour Shootout Filmmaking Competition, and she received a Best Actress nomination. BGF collaborates with and produces multi-media content for artists, actors, designers, theatrical productions, composers, musicians and corporations. Lia has appeared in the films Wolf, New Jack City, A Kiss Before Dying, King of New York, Big Trouble in Little China, The Last Dragon, Taxman. She stars in and served as Executive Producer for the short independent films Hide and Seek, Balancing Act, Rom-Com Gone Wrong, Belongingness and When the World was Young. She is also the Executive Producer for The Cactus, The Language Lesson, The Writer and Cream and 2 Shugahs. All text, graphics, articles & photographs: © 2000-2021 Lia Chang Multimedia. All rights reserved. All materials contained on this site are protected by United States copyright law and may not be reproduced, distributed, transmitted, displayed, published or broadcast without the prior written permission of Lia Chang. You may not alter or remove any trademark, copyright or other notice from copies of the content. For permission, please contact Lia at liachangpr@gmail.com