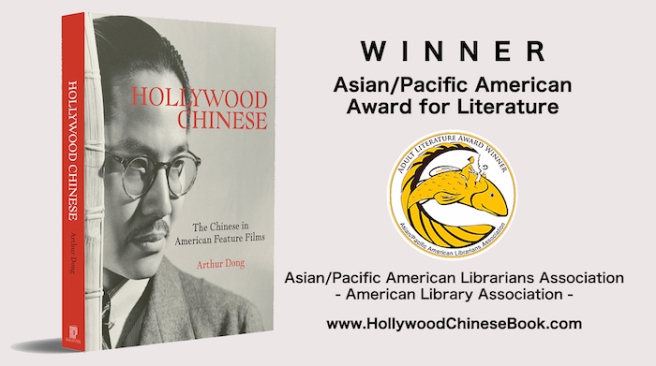 Winning the Honors Title Award in the adult nonfiction category is Hollywood Chinese: The Chinese in American Feature Films (Angel City Press). Written by Oscar®-nominated filmmaker Arthur Dong, Hollywood Chinese presents an intimate look at the Chinese American role and influence in Hollywood, from some of the earliest films set in America’s Chinatowns to the contemporary artists remaking the face of Hollywood. Filled with more than 500 vintage photographs, movie posters, lobby cards and assorted ephemera based on the author’s personal collection, the coffee-table book shows the myths, misconceptions, and memorable moments of the Chinese in American cinema.

Hollywood Chinese was previously selected a “Critic’s Choice” by Kenneth Turan at the Los Angeles Times, and one of “13 Smart Must-Read Books on Race and Hate” by The Advocate. Dong’s first book, “Forbidden City, USA: Chinatown Nightclubs 1936-1970“, received the American Book Award and the Art Deco Historic Preservation Award.

For a complete list of the Asian/Pacific American Awards for Literature including adult fiction and nonfiction titles, click here.

For more on the author, please visit: www.DeepFocusProductions.com