Ali Ewoldt (Phantom of the Opera) has had a dizzying array of projects on camera lately including a short film, The Cactus; Christopher Rice’s 2020 Tappy Christmas Special, a musical celebration inspired by the televised holiday specials of the 1960’s; and a new musical, Christine Toy Johnson and Jason Ma’s Broken Ground.

From December 11- January 2, Ali Ewoldt can be seen as Rose Smith in Irish Repertory Theatre’s virtual production of Meet Me in St. Louis: A Holiday Special in Song and on Screen, adapted and directed by original Broadway cast member (and Irish Rep artistic director) Charlotte Moore.

In this heartwarming holiday musical, based on the beloved 1944 film of the same name, the Smith family grapples with life changes and new love in a bustling St. Louis on the brink of the 1904 World’s Fair. This special digital adaptation is an abridged version of the 1989 Broadway musical, based on the 1944 film of the same name starring Judy Garland, and will include favorite tunes, including “The Trolley Song,” “The Boy Next Door” and “Have Yourself a Merry Little Christmas.”

Pricing is “pay what you can,” including a free option, allowing everyone to participate in this event, with a suggested ticket price of $25. Click here to purchase tickets and check out the full schedule.

BROADWAY BARKADA Music Video -“You Will Be Found” 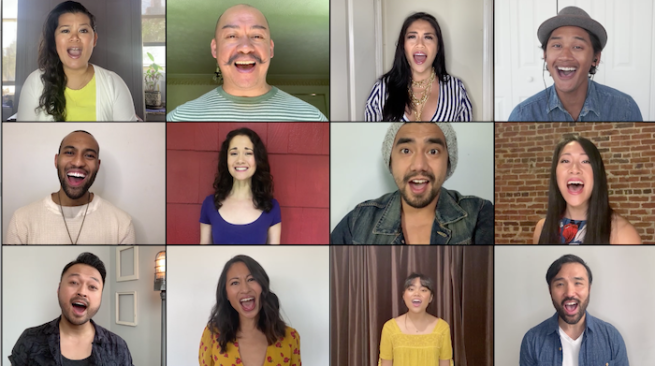 Ali joined her Broadway Barkada pals, including Joshua Dela Cruz (“Blue’s Clues & You!)”, Marc delaCruz (Hamilton), Adam Hyndman (Hadestown), Karla Garcia (Hamilton), and Kay Trinidad (Hadestown), in a music video featuring a new arrangement of Benj Pasek & Justin Paul’s anthemic “You Will Be Found”, arranged by Steven Cuevas (Kinky Boots, Once On This Island) and mixed by Jonathan Cuevas. The project was created to honor essential workers and first responders during the COVID-19 pandemic. In conjunction, Broadway Barkada created a GoFundMe page to help raise funds for one of their favorite small businesses, Jeepney, a Filipino restaurant in the Lower East Side of Manhattan, run and owned by Nicole Ponseca.

The cast is supported by an all-Filipino, five-member band with Steven Cuevas on Piano and Viola, Peter Leigh-Nilsen on Violin 1 & Violin 2, Jonathan Cuevas on Cello & Electric Guitar, Brandon Ilaw on Acoustic Guitar & Drums and Laura Dadap on Bass.

Broadway Barkada Releases Music Video of Benj Pasek & Justin Paul’s “You Will Be Found” on #GivingTuesday in Support of Filipino Restaurant, Jeepney

Just in time for the holidays, Ali Ewoldt stars inThe Cactus alongside Emily Borromeo (School of Rock, Broadway Bounty Hunter), an original comedy short that she co-wrote with Jessica Wu (Miss Saigon, A Chorus Line).The Cactus shows us just how much ‘fun’ it is to be with family for the holidays.

The Cactus is dedicated to the loving memory of Ali’s cousin, Edgar Alberto Anolin. Check out the link below for more behind the scenes photos.

Check out the presentation below starting at 14:02.

Taking place in 1912 on the cusp of a new era for China, Broken Ground tells the story of 18-year old Xue Lán, as she sets out on the path created for her by tradition and her family to marry a young soldier. Still grieving the recent loss of her mother and twin brother and yearning to make peace with the new life before her, she seeks guidance from both Guan Yin, the goddess of compassion, and the spirit of her mother. Transported to another space and time of an ancient myth via an embroidered story in NüShu, the centuries-old writing system created by and only for women, Xue Lán connects to her mother’s wishes for her and discovers that she can indeed find happiness by both speaking her truth and honoring her destiny. For more information, visit New York Theatre Barn’s website: www.nytheatrebarn.org.

Ali’s last collaboration with the musical team of Christine Toy Johnson and Jason Ma was the new musical, Barcelona, in 2014.