On Wednesday, December 9, Victory Gardens Theater is presenting Voices Of Tomorrow: Their World On Stage, when the powerful artistic works created by CPS students in our Drama in the Schools program are performed by professional Chicago actors during a free virtual showcase at 8:00 p.m. EST. 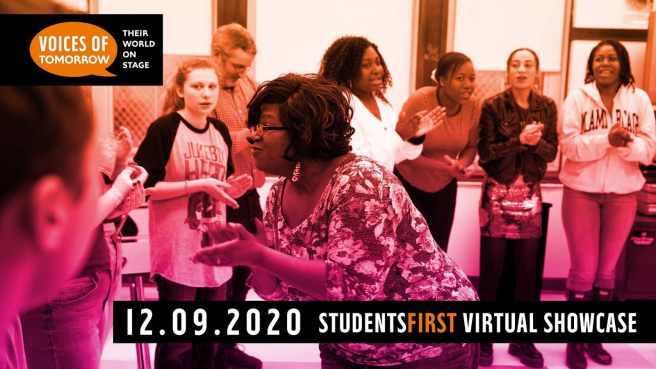 Chicago students have experienced a year unlike any other—the 2019 teacher’s strike, the covid-19 pandemic, and civil unrest and urgent calls for social justice have radically reshaped the ways we live and learn. Utilizing skills learned from our Drama in the School curriculum, students will lift their artistic voices to shine a light on their ever-changing world, create societal change, and tell their own stories. Every student whose work is selected for the showcase will receive a $500 scholarship. All donations support StudentsFirst, Victory Gardens Theater’s commitment to serving Chicago youth through immersive arts education. A donation of any amount will make a huge difference in helping Chicago’s students lift up their voices. Click here to donate.

André De Shields is the triple-crown winner of the 2019 awards season, having won the Outer Critics Circle, Drama Desk, and Tony Awards for best featured actor in a musical for his critically acclaimed performance as Hermes in Hadestown. The Actors’ Equity Foundation followed suit with the Richard Seff Award, honoring veteran stage actors’ best supporting performances of the year. Mr. De Shields recently received the 2020 Grammy Award for Musical Theater Album for Hadestown, an honorary Doctor of Arts Degree from Boston Conservatory at Berklee, the 2019 Project1Voice Lifetime Achievement Award, the 2019 SAGE Joyce Warshow Lifetime Achievement Award, The York Theatre Company’s 2019 Oscar Hammerstein Award for Lifetime Achievement in Musical Theatre, and was inducted into the Theater Hall of Fame. He received the Key to the City of Baltimore from Mayor Bernard C. “Jack” Young in August, 2019. Prior to his Tony Award win, Mr. De Shields was best known for his show-stopping performances in four legendary Broadway productions: The Wiz , Ain’t Misbehavin’ (Emmy Award), Play On! (Tony Nomination), and The Full Monty (Tony Nomination). In a career spanning fifty one years, he has distinguished himself as an unparalleled actor, director, and educator, receiving in 2018 the 8th Annual Off Broadway Alliance Legend Award, and the 33rd Annual Bob Harrington Life Achievement Bistro Award. Among his other accolades are the 2009 National Black Theatre Festival’s Living Legend Award and the 2007 Village Voice Obie Award for Sustained Excellence of Performance. De Shields can currently be seen on Netflix as the Algebra Tutor in “John Mulaney & The Sack Lunch Bunch” and on The CW as Chubby in “Katy Keene.” De Shields is a proud member of AEA, SAG-AFTRA, and SDC. www.andredeshields.com