Tony and Emmy Award-winners Brian Cranston (“Breaking Bad,” Trumbo) and Tony Shalhoub (“Monk,” The Band’s Visit) are among the stellar performers being brought to you by Penguin Rep Theatre as part of the exciting, innovative Keeping Live Theatre Alive! initiative. 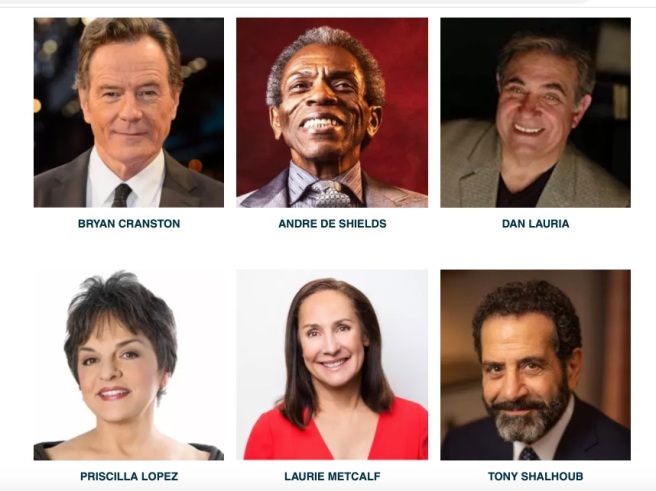 Keeping Live Theatre Alive! is the brainchild of actor Dan Lauria (“The Wonder Years,” Lombardi), who called upon dozens of popular stage and screen stars to help keep theatre going by creating short videos of themselves reading their works, including monologues, stories, reminiscences, and poems – that they’ve written and posted.

“Every sector in society has been impacted negatively by COVID-19, including theatres,” Dan Lauria said. “I wanted to raise awareness of the plight of these organizations while celebrating how actors are keeping their creative juices flowing.”

“Like all arts institutions, Penguin has been hard hit by the pandemic,’ said Joe Brancato, founding Artistic Director of Penguin Rep Theatre,” but we’ve been hearted by the outpouring of concern and support from our patrons, subscribers, donors, and business sponsors, all eager for live theatre to make its comeback at the barn.”

“Until we can reopen the theatre doors safely, we’re pleased to be able to bring programs like Keeping Live Theatre Alive! to our audiences,” added Penguin executive director Andrew M. Horn. “And plans are in the works for Penguin to present play readings online. Watch for our announcements.”

Under the dynamic leadership of Joe Brancato and Andrew Horn, Penguin has grown in just over four decades from a summer theatre in a converted 1880s hay barn to one of the Hudson Valley’s most influential nonprofit cultural institutions.

Since its founding in 1977, Penguin Rep, a professional Equity theatre based in Stony Point, New York, has entertained more than 400,000 people with outstanding productions of more than 150 plays, specializing in new works by established and emerging writers.

Many plays staged Penguin, dubbed “the gutsiest little theatre’ by the NY Times, have moved on to successful runs Off-Broadway and to showplaces around the country and abroad. For additional information and the latest in Penguin Rep Theatre programs, visit the website at www.penguinrep.org.