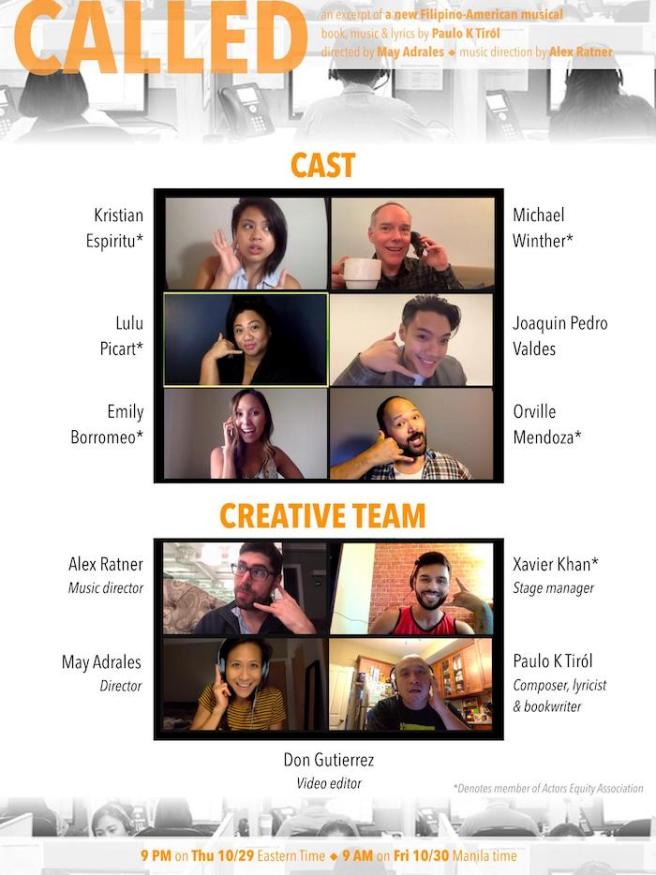 To “save a seat”, click here: https://docs.google.com/…/1FAIpQLSeXXtJ1BtN…/viewform…
Your response will ensure that you receive the link to the virtual reading.

Inspired by the Philippines’ being the call center capital of the world, CALLED tells the story of Carmela, an ambitious, overachieving call center agent in Manila, who is five days away from achieving her long-time dream of being transferred to the United States — that is, if she can deal with her obnoxious fellow agents, the reappearance of an old flame, and an elderly widower calling from North Dakota who asks to be her friend. Through this frame, CALLED explores the American dream, post-colonial thought, and the transactional nature of relationships in today’s world.

“Since October 2019, I’ve had the privilege of developing CALLED as one of eleven Fellows in the 2019-20 class of the Dramatists Guild Foundation Fellows program,” shared Tiról. “And over the last two months, to culminate my year as a DGF Fellow, I’ve had the honor of working with director May Adrales, and an incredible cast and creative team, to produce this virtual reading of a 55-minute excerpt of the show.

CALLED continues to be a work in progress, but I’d love to share this milestone in the show’s development with you all. And with this virtual format, I’m excited that I get to share it with family and friends on the East coast, in Manila, and everywhere in between.”

Lia Chang is an actor, a multi-media content producer and co-founder of Bev’s Girl Films, making films that foster inclusion and diversity on both sides of the camera. Bev’s Girl Films’ debut short film, Hide and Seek was a top ten film in the Asian American Film Lab’s 2015 72 Hour Shootout Filmmaking Competition, and she received a Best Actress nomination. BGF collaborates with and produces multi-media content for artists, actors, designers, theatrical productions, composers, musicians and corporations. Lia has appeared in the films Wolf, New Jack City, A Kiss Before Dying, King of New York, Big Trouble in Little China, The Last Dragon, Taxman. She stars in and served as Executive Producer for the short independent films Hide and Seek, Balancing Act, Rom-Com Gone Wrong, Belongingness and When the World was Young. She is also the Executive Producer for The Cactus, The Language Lesson, The Writer and Cream and 2 Shugahs. All text, graphics, articles & photographs: © 2000-2020 Lia Chang Multimedia. All rights reserved. All materials contained on this site are protected by United States copyright law and may not be reproduced, distributed, transmitted, displayed, published or broadcast without the prior written permission of Lia Chang. You may not alter or remove any trademark, copyright or other notice from copies of the content. For permission, please contact Lia at liachangpr@gmail.com