The New York Public Library is presenting a series of monthly virtual talks and book discussions with Asian American Authors. Henry Chang, author of Lucky, the latest volume in the gritty Detective Jack Yu series set in New York’s Chinatown, is the first in the Talking Books: Asian American Authors in Conversation series on Wednesday, October 14, 2020 at 6 – 7 p.m Author Henry Chang will be attending a virtual conversation with Chinatown’s Chatham Square Library. Chang will be reading a passage from Lucky of the Det. Jack Yu novels, following a discussion on future projects and collaborations. Register online for Zoom link. Space is limited to 100 people. 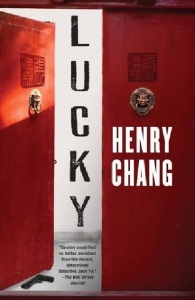 You must register with an email address in order to receive the link to participate. The link will be sent to you by email the morning of the discussion. You will need a device with audio and/or video and an internet connection to join. Connect to get updates from NYPL and information about the digital resources and services available during their temporary closure.

Henry Chang is a New Yorker, a native son of Chinatown and the Lower East Side. His poems have appeared in the seminal Yellow Pearl anthology, and in Gangs In New York’s Chinatown. He has written for Bridge Magazine, and his fiction has appeared in On A Bed Of Rice and in the NuyorAsian Anthology.  His debut novel Chinatown Beat garnered high praise from the New York Times Book Review, the Boston Globe, the Washington Post, among others.
Henry Chang is a graduate of CCNY (City College of New York). He has been a lighting consultant, and a Security Director for major hotels, commercial properties, and retail businesses in Manhattan.

Introducing the series with CHINATOWN BEAT (2006) where NYPD Detective Jack Yu has gotten a ‘hardship’ transfer to the Fifth Precinct, his old neighborhood, just to be closer to his dying Pa. In Chinatown again, Jack knows every manner of Chinese crime will come his way. The murder of a Tong bigshot, Uncle Four, kicks things off. In YEAR OF THE DOG (2008) a Chinese takeout delivery boy is brutally murdered in the Housing Projects, but love pays out for ailing Chinatown bookie Sai gor. In RED JADE ( 2010) Jack pursues the femme fatale killer of Uncle Four, taking him to Seattle. A Chinese man found floating in the Harlem River launches DEATH MONEY (2014) and in LUCKY (2017) Jack tries to save Chinatown boyhood blood brother and ex-gang boss Lucky Louie, who returns to wreak havoc on the Chinatown underworld.