CAPA21 received an incredible $100,000 donation from actress and activist Tamlyn Tomita and actor Daniel Blinkoff in support of our efforts to take back the White House and Congress, announced CAPA21 Chair Glen S. Fukushima and CAPA21 President Dale Minami. 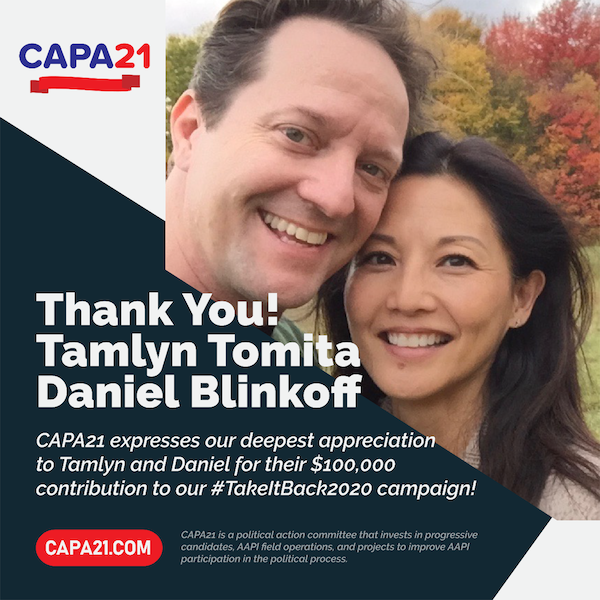 From Tamlyn and Daniel:

We believe in America.
We believe that we are all in this together.
We believe in striving for a more perfect union.
We believe that we, as a nation, can be better than what we have been these last 4 years.
We believe in moving forward together with an honest look at our history and a hopeful vision of our future.
We believe in healthcare for all, and justice for all: economically, socially, and environmentally.
We are proud to support CAPA21 in its efforts to stop and reverse our country’s descent into tyranny by helping to elect candidates that uphold the American values of character and compassion, conscientiousness and civility, and courageous conviction.
We believe that Joe Biden and Kamala Harris are of the people, will work for the people, alongside Democrats in the Senate and the House, and stand by the people.
We believe that, with our collective hope, we are stronger together and that we will Build Back Better.

“Glen and I, and all of us at CAPA21, express our deepest appreciation to Tamlyn and Daniel for investing in our ongoing efforts to win this election and stop Trump and Trump Republicans from further destroying American democracy,” said Dale. “Tamlyn and Daniel recognize the existential threat that we’re facing and are joining forces with us to ensure that AAPIs play critical roles in voter participation, voter protection, and voter empowerment.”

Our vision is of a country where AAPIs have a powerful presence and role in all branches and levels of government and politics, achieved through AAPI voters who are engaged, informed, and empowered.

CAPA21 has roots in the Coalition of Asian Pacific Americans, founded in 1988 as one of country’s first AAPI PACs.