On Saturday, May 23 at 8pm, LAByrinth Theater Company is presenting a one-night-only virtual benefit reading of Our Lady of 121st Street, the play that led The New York Times to dub Stephen Adly Guirgis “the poet laureate of the angry,” and to declare LAByrinth “perhaps the most exciting troupe in the city.”

This event is free to the public, and donations will be accepted throughout the evening to help the company maintain operations and continue their growth amidst the coronavirus pandemic. The reading will be available to view for 24 hours.

To watch, and donate, please visit www.labtheater.org.  After the reading, head over to their Instagram page to chat live with members of the cast, and LAByrinth company members, including Stephen Adly Guirgis, Liza Colón-Zayas, John Ortiz, and more. Company member Joey Palestina will host.

Among the equally hilarious and tragic twelve characters, you’ll meet Rooftop, a chronically unfaithful but otherwise popular Los Angeles DJ, looking to reconcile with the love of his life; Pinky and Edwin, two brothers tragically linked forever; and the outrageously angry Norca, who doesn’t let the fact that she slept with her best friend’s husband deter her from the full expectation of being immediately forgiven of her sin by her best friend, Inez, still in pain fifteen years later. The rest of the crowd in this dark, insightful, and very funny comedy inevitably square off on each other, motivated by rage, pain, and a scary desire to come clean—perhaps for the first time. 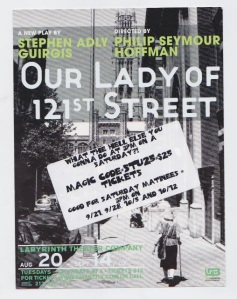 The company will also be presenting Stephen Adly Guirgis with the Dave Hogue Award. The Dave Hogue Award is LAByrinth Theater Company’s highest accolade given to a member of our community in honor of their artistic courage and outstanding dedication to LAB. This year, we are thrilled to present The Dave Hogue to Stephen Adly Guirgis. Stephen’s longtime commitment of 25+ years to LAB, his contributions of over a dozen groundbreaking world premiere plays with LAB, his tenure as a past artistic director, his role as a mentor to many younger artists, and as a conduit of meaningful relationships, like Dave Hogue, for LAB makes this year’s distinguished presentation a no-brainer.

Over twenty-five years, that small group of actors has grown to a company of more than a hundred artists. LAByrinth is an ensemble-driven company comprised of actors, designers, directors, musicians, and writers committed to developing and producing new works for the stage, giving voice to new perspectives that are powerful, groundbreaking, and have changed the face of America’s theatrical landscape.

LAB’s journey has taken them from INTAR, to Center Stage NY, to The Public Theater, to the Bank St. Theater and now their newest home, NYC’s oldest continuously running off-broadway theater, the Cherry Lane Theatre.

From LAB’s first two productions in the early 90’s, David Deblinger’s one man show, Nobody’s Home, and Lilian Slugocki’s family drama RoughHouse at INTAR, to multiple Stephen Adly Guirgis world premieres including In Arabia, We’d All be Kings (1999), Jesus Hopped the A Train (2000), and Our Lady of ‪121st Street‬ (2002) with all three directed by Philip Seymour Hoffman at Center Stage NY, to Brett C. Leonard’s Guinea Pig Solo (2004) and Bob Glaudini’s ‪Jack Goes Boating‬ (2007) at ‪The Public Theater‬, to Melissa Ross’s Thinner Than Water (2011) at the Bank St Theater, to Maggie Bofill’s Devil of Choice (2018) at the ‪Cherry Lane Theatre‬, and most recently, our co-production of Stephen Adly Guirgis’s Halfway Bitches Go Straight To Heaven with Atlantic Theater Company, LAByrinth Theater Company has produced over fifty world premieres and developed over 250 new plays.

2014-15 Outer Critics Circle Award Nominations; Something Rotten!, On the Twentieth Century, An American in Paris garner most nods

THE GET DOWN, Baz Luhrmann’s New Drama Series Set in 1970s NYC That Gave Birth to Hip-Hop, Punk and Disco, to Premiere on Netflix in 2016

Stephen Adly Guirgis’ BETWEEN RIVERSIDE AND CRAZY Extends through March 22