The San Francisco Bay Area Theatre Critics Circle announced the recipients of its 44th Annual “Excellence in Theatre” awards with an online presentation via its website on April 30.

Originally scheduled for March 30 at San Francisco’s Victoria Theatre, the event was postponed as the coronavirus crisis gained a foothold in the US. It was then cancelled altogether as the situation worsened, as was every other scheduled large gathering.

San Francisco Playhouse’s production of Lauren Yee’s King of the Yees won in five categories – for Entire Production in San Francisco and the Bay Area, Principal Actor in a Play for Francis Jue, Featured Actress in a Play for Rinabeth Apostol and Sound Design for Mikhail Fiksel.

Francis Jue garnered his second award of the season for Featured Actor in a Play in Julia Cho’s The Language Archive, produced by TheatreWorks Silicon Valley. His castmate Jomar Tagatac won for Principal Actor in a Play. 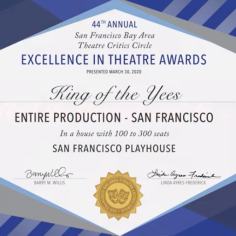 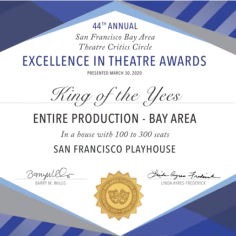 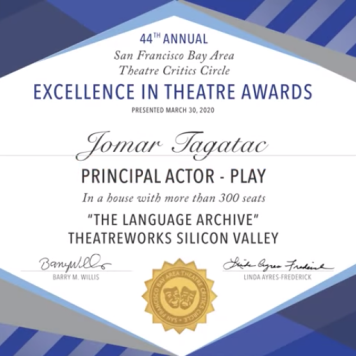 For more information about the Circle Awards, visit the SFBATCC web site at www.sfbatcc.org.

The SFBATCC is a private 501(c)(6) non-profit organization dedicated to promoting and serving theatres of all types and sizes in the greater region by recognizing excellence and outstanding achievement in the field. Active since 1976, the Circle consists of reviewers covering theatre in all nine Bay Area counties, across various media, who are voted into membership by existing members based on the quality and consistency of their reviews. The Circle hosts an annual awards ceremony each Spring to celebrate superior work in the previous year.