On this week’s Mu-tini Hour, Lily Tung Crystal hosts Lauren Yee, the second most produced playwright in the country and writer of Cambodian Rock Band on Friday, April 17, 2020 from 7pm – 8:30pm (CDT). They’re joined by Joe Ngo and Jane Lui, who starred in the Oregon, California, and New York premieres of the show. They’ll talk about how the show was brought to life, as well as their artistic projects and how they’re lifting themselves and others through this time. 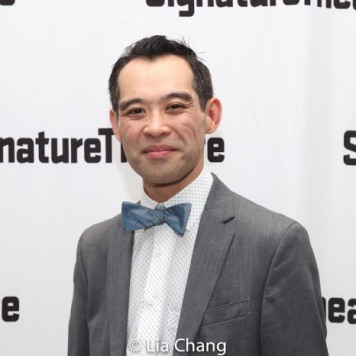 This online hangout is free, open to the public, and will be live-streamed Theater Mu’s Facebook page. To get a better sense of the event, please follow the ticket link theatermu.org/mutini-hour and RSVP.

Signature Theatre recently announced the cast recording of their acclaimed production of Lauren Yee’s Cambodian Rock Band, featuring songs by Dengue Fever, will be released on May 8 by Yellow Sound Label. The album will be produced by Michael Croiter and Matthias Winter. It will be available on Amazon, iTunes, Spotify, and wherever music is sold. The album is currently available for pre-order at www.yellowsoundlabel.com.

The cast of Cambodian Rock Band includes Abraham Kim as Rom/Journalist, Jane Lui as Pou/S21 Guard, Joe Ngo as Chum, Courtney Reed as Neary/Sothea,  Moses Villarama as Ted/Leng/Cadre, and Francis Jue, who recently received a Lucille Lortel nomination for Outstanding Featured Actor in a Play for his turn as as Duch.

Guitars tuned. Mic checked. Get ready to rock! This darkly funny, electric new play with music tells the story of a Khmer Rouge survivor returning to Cambodia for the first time in thirty years, as his daughter prepares to prosecute one of Cambodia’s most infamous war criminals. Backed by a live band playing contemporary Dengue Fever hits and classic Cambodian oldies, this thrilling story toggles back and forth in time as father and daughter face the music of the past. Directed by Chay Yew, the New York premiere of this intimate rock epic about family secrets is set against a dark chapter of Cambodian history. It launches Steinberg Award-winning playwright Lauren Yee’s Residency 5.

She is the winner of the Doris Duke Artists Award, the 2019 Steinberg Playwright Award, Whiting Award, Steinberg/ATCA Award, Horton Foote Prize, the Kesselring Prize, American Academy of Arts and Letters literature award, the Francesca Primus Prize and a Hodder Fellowship at Princeton. She has been a finalist for the Edward M. Kennedy Prize and the Susan Smith Blackburn Prize. Her plays were the #1 and #2 plays on the 2017 Kilroys List.

Lia Chang is an actor, a multi-media content producer and co-founder of Bev’s Girl Films, making films that foster inclusion and diversity on both sides of the camera. Bev’s Girl Films’ debut short film, Hide and Seek was a top ten film in the Asian American Film Lab’s 2015 72 Hour Shootout Filmmaking Competition, and she received a Best Actress nomination. BGF collaborates with and produces multi-media content for artists, actors, designers, theatrical productions, composers,  musicians and corporations. Lia has appeared in the filmsWolf, New Jack City, A Kiss Before Dying, King of New York, Big Trouble in Little China, The Last Dragon, Taxman. She stars in and served as Executive Producer for the short independent films Hide and Seek, Balancing Act, Rom-Com Gone Wrong, Belongingness and When the World was Young. She is also the Executive Producer for The Cactus, The Language Lesson, The Writer and Cream and 2 Shugahs.