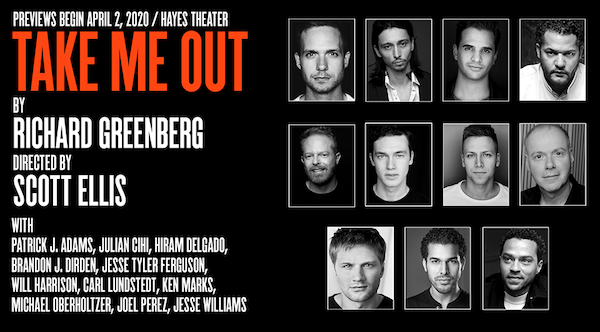 In the Tony Award®-winning Take Me Out, playwright Richard Greenberg celebrates the personal and professional intricacies of America’s favorite pastime. When Darren Lemming (Jesse Williams), the star center fielder for the Empires, comes out of the closet, the reception off the field reveals a barrage of long-held unspoken prejudices. Facing some hostile teammates and fraught friendships, Darren is forced to contend with the challenges of being a gay person of color within the confines of a classic American institution. As the Empires struggle to rally toward a championship season, the players and their fans begin to question tradition, their loyalties, and the price of victory.

Season subscriptions are currently available, with packages starting at $216. To purchase or for more information, visit 2ST.com or call Subscriber Services at 212-246-4422.

BIOGRAPHIES
PATRICK J. ADAMS (Kippy Sunderstrom) is perhaps best known for his seven seasons as Mike Ross on USA Network’s hit drama, “Suits,” a role which garnered him a SAG Award nomination in the category of Outstanding Performance by a Male Actor in a Drama Series. Adams has also directed “Suits” a number of times, including the landmark 100th episode. Additional television credits include a recurring role on the third season of Amazon’s critically acclaimed drama series, “Sneaky Pete,” the 2014 television miniseries “Rosemary’s Baby” directed by Agnieska Holland, the acclaimed series “Luck” opposite Dustin Hoffman and Michael Gambon, and “Orphan Black” opposite Tatiana Maslany, as well as “Lost,” “Friday Night Lights,” “Pretty Little Liars,” “N.C.I.S.,” “Lie To Me,” “Legends of Tomorrow,” and “Flash Forward.” On film, Adams starred in the 2019 sci-fi feature film and Toronto International Film Festival selection, Clara. Other film credits include the hit comedy, Old School, directed by Todd Phillips, and the 2009 Berlin Film Festival competitor, Rage, directed by internationally renowned filmmaker Sally Potter alongside Judi Dench, Jude Law, Dianne Wiest and Steve Buscemi. His indie feature work includes The Waterhole, 2009 Slamdance entry Weather Girl, 6 Month Rule directed by Blayne Weaver, Car Dogs opposite Octavia Spencer, and the indie feature comedy Room For Rent. On stage, Adams most recently starring alongside Troian Bellisario in the Old Globe Theatre’s world premiere production of Anna Ziegler’s The Last Match. He produced and starred in Bill Cain’s (“House of Cards”) acclaimed production of 9 Circles at the Bootleg Theatre in Los Angeles for which he received a Backstage Garland Award for Best Performance in a Play and a 2012 Los Angeles Drama Critics Circle Award nomination. He is a member of the Ojai Playwrights Conference, starring in new works by established and developing playwrights. Cain’s Equivocation was developed at Ojai and Adams subsequently starred in the celebrated Geffen Playhouse production, which received the 2010 Best Production at the LA Ovation Awards. He made his professional stage debut in the West Coast premiere of Edward Albee’s The Goat, or Who Is Sylvia? at The Mark Taper Forum, which also took home Best Play at the Ovation Awards. Adams also produced and directed a hit revival of Marat/Sade, for which he accepted Best Production at the L.A. Weekly Theatre Awards. He will next be seen on TV in the upcoming National Geographic drama series, “The Right Stuff,” based on the best-selling novel of the same name by Tom Wolfe.

Julian Cihi (Takeshi Kawabata) was born and raised in Tokyo, Japan. He has been seen on Broadway in Doctor Zhivago and Off-Broadway in Romeo and Juliet (CSC). His regional credits include A Month in the Country (Williamstown Theater Festival), Wild Goose Dreams (La Jolla Playhouse), and The Great Wave (Berkeley Rep). Julian has also performed in Japan, including RENT and a musical adaptation of As You Like It, all in Japanese. He has been seen on TV in “Mr. Robot” (USA), “Gypsy” (Netflix), “Crashing” (HBO), “The Outpost” (CW), “The Tick” (Amazon Prime). Education: Brown University (BA); NYU Grad Acting (MFA).

Hiram Delgado (Martinez) will make his Broadway debut in this production. He has appeared Off-Broadway in Agnes (59E59) and regionally at Williamstown Theatre Festival. Hiram’s film and TV credits include “The Code,” “Madame Secretary,” and The Vessel. Education: BA, University of Puerto Rico: MFA, NYU Graduate Acting.

BRANDON J. DIRDEN (Davey Battle) starred on Broadway as Martin Luther King, Jr. in the Tony Award-winning production of All the Way, with Bryan Cranston, and as Booster in the Tony Award-winning revival of August Wilson’s Jitney. Additional Broadway credits include Clybourne Park, Enron, and Prelude to a Kiss. Off-Broadway, he has appeared in The Piano Lesson, for which he won Obie, Theatre World, and AUDELCO awards; The First Breeze of Summer and Day of Absence at Signature Theatre; Detroit ’67 at The Public Theater and Classical Theatre of Harlem; Peter and the Starcatcher at New York Theatre Workshop and as ‘Brutus’ in TFANA’s production of Juilius Caesar. On screen, he has appeared in “The Good Wife,” “For Life,” “The Big C,” “Public Morals,” “Manifest,” “The Get Down,” “The Accidental Wolf,” “Blue Bloods,” “The Quad,” and four seasons of FX’s “The Americans” as Agent Dennis Aderholt. He is currently shooting the upcoming ABC series “For Life” and recently completed work on the FX miniseries, “Mrs. America.” He has directed numerous plays by Dominique Morriseau and August Wilson. Brandon is a frequent volunteer at the 52nd Street Project and a proud member of Actors’ Equity Association and Fair Wage On Stage.

Jesse Tyler Ferguson (Mason Marzac) currently stars as “Mitchell Pritchett” on the Award-­winning ABC comedy “Modern Family.” Recently renewed for its 11th and final season, the show has earned five Emmy Awards® for Outstanding Comedy Series, a Golden Globe Award® for Outstanding Comedy Series and four Screen Actors Guild Awards for Outstanding Performance by an Ensemble in a Comedy Series. Ferguson has also received five Emmy Award® nominations for Outstanding Supporting Actor in a Comedy Series and three People’s Choice Award nominations for “Favorite Comedic TV Actor” on behalf of “Modern Family.” A longstanding advocate for marriage equality, Ferguson co-founded Tie The Knot in 2012 with his husband, where they design limited edition bow ties with all the proceeds going to various organizations that fight for LGBTQ equality around the world. In 2017, he won the Drama Desk Award for “Best Solo Performance” for his 40-character turn in the Broadway production of Fully Committed. He made his Broadway debut at the age of 21 as “Chip” in George C. Wolfe’s revival of On The Town. He later went on to originate the role of “Leaf Coneybear” in Second Stage’s Tony Award®-winning Broadway musical, The 25th Annual Putnam County Spelling Bee (Drama Desk Award, “Outstanding Ensemble Performance”). He has worked extensively with The New York Public Theatre’s Shakespeare in the Park in such notable productions as The Merchant of Venice, The Tempest, The Winter’s Tale, A Midsummer Night’s Dream and The Comedy of Errors where he performed alongside Al Pacino, Sam Waterston, Jesse L. Martin, Martha Plimpton, Hamish Linklater and Lily Rabe. Other theatre credits include world premieres of Christopher Shinn’s Where Do We Live and Michael John LaChiusa’s Little Fish (Second Stage) as well as “Sir Robin” in Spamalot, “Leo Bloom” in The Producers, both at The Hollywood Bowl, and most recently Log Cabin with Playwrights Horizons, directed by Tony Award® and Obie Award-winner Pam MacKinnon. Ferguson appeared in Bess Wohl’s Grand Horizons this summer as part of the Williamstown Theater Festival’s 65th season.

WILL HARRISON (Jason Chenier) is a 2019 Drama graduate of Carnegie Mellon University and is making his Broadway debut with Take Me Out.

Jesse Williams (Darren Lemming) is an activist/actor/entrepreneur and former high school teacher. He plays ‘Dr. Jackson Avery’ on ABC’s hit series “Grey’s Anatomy” and has appeared in films including Lee Daniels’ The Butler, The Cabin in the Woods, Band Aid, and the upcoming Jacob’s Ladder and Selah and the Spades. Jesse served as senior producer and correspondent alongside Norman Lear for their EPIX docuseries “America Divided.” He executive produced the documentary “Stay Woke: The Black Lives Matter Movement,” which premiered summer 2016 and is currently touring internationally. Williams is a partner and board member of Scholly, a mobile app that has connected students directly to over 100 million dollars in unclaimed scholarships. He is the co-founder of BLeBRiTY, a very successful black culturally centered mobile game and the Ebroji Mobile App, a popular cultural language keyboard. Williams is founder of the production company, farWord Inc. and the executive producer of “Question Bridge: Black Males,” a series of transmedia art installations on display as part of the Smithsonian National Museum of African American History and Culture’s permanent collection. Williams gained international attention for his 2016 BET Humanitarian Award acceptance speech. He is also the youngest member to sit on the Board of Directors for both Advancement Project, a leading national civil rights advocacy organization, and Harry Belafonte’s arts and social justice organization, Sankofa.org.