The Coalition for Asian American Children and Families (CACF) is presenting the 2019 Catalyst for Change Awards Benefit and Awards Gala on Monday, November 4 at Edison Ballroom, 240 W. 47th Street in New York at 6:00 pm. Please visit www.cacf.org for tickets and more information.

The Catalyst for Change Awards honor APA Leaders who are a force for positive change in the community and in their fields of work. 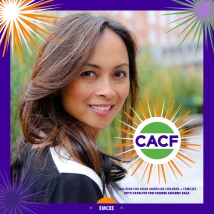 EVA NOBLEZADA received her second Tony nomination for her current role as Eurydice on Broadway in Hadestown after her critically acclaimed run in the show last fall at the National Theatre in London. She’ll soon be seen as the lead in Diane Paragas’ film, Yellow Rose, a coming of age story about an undocumented Filipina, which has been scooping up awards at film festivals across the country, and has recently been acquired by Sony Pictures Worldwide Acquisitions. In 2017, she received her first Tony nomination when she made her Broadway debut as the title role in Cameron Mackintosh’s epic revival of Miss Saigon. Variety called her Broadway debut “entrancing.” She previously starred in the West End revivals of Miss Saigon and Les Miserables. She is the recipient of the 2019 Los Angeles Asian Pacific Film Festival for Best Breakout Actor for Yellow Rose and the WhatsOnStage Award for “Best Actress in a Musical,” for Miss Saigon. Noblezada was a high school student in Charlotte, NC, when she was discovered by casting director Tara Rubin at the 2013 Jimmy Awards in NYC.

Jason DaSilva is a director, producer, writer and disability rights activist best known for the Emmy Award winning documentary, When I Walk, the first film in a documentary trilogy. The documentary follows his diagnosis of primary progressive multiple sclerosis for seven years as he progresses from cane to walker to wheelchair. Following the success of When I Walk, Jason released the second film in the trilogy, When We Walk. When We Walk follows his life as he deals with his MS and fights to stay close with his son. The film is based on his New York Times Op-Ed article, Mapping the Disability Trap. In 2019, the film premiered at the Hot Docs Film Festival, won best documentary at the Center for Asian American Media’s CAAMFest, and had its New York debut at the Human Rights Watch Film Festival. The final film, When They Walk, is currently in production.

Ram Raju, MD, combines his executive leadership experience in health care with a deep commitment to achieving social equity to improve the health of communities  in need. As senior vice president and community health investment officer, he evaluates the needs of Northwell’s most-vulnerable communities, and provides solutions for them by collaborating with community-based organizations. He’s responsible for promoting, sustaining and advancing an environment that supports equity and diversity, and helping the health system eliminate health disparities.

Project by Project (PbP) was founded in 1998 by a group of young Asian American professionals motivated to empower the Asian American community by developing leaders through innovative philanthropy. Core to PbP’s methodology is a three-pronged approach to enhancing volunteerism, awareness, and fundraising for issues uniquely affecting Asian America. Building upon those principles, PbP created a platform of annual thematic campaigns tackling different causes from year to year. From domestic violence, to immigration, to homelessness, PbP has become a gateway for young Asian Americans to explore civic engagement while exercising leadership skills.

CACF: The Coalition for Asian American Children and Families was founded in 1986 by a group of social service providers who were concerned that New York City’s private and public health, education and human service institutions found not adequately serve the growing number of Asian Pacific American (APA) and immigrant families. CACF is the nation’s only pan-Asian children and families’ advocacy organization bringing together community-based organizations as well as youth and parents to fight for equity for Asian Pacific Americans (APAs).