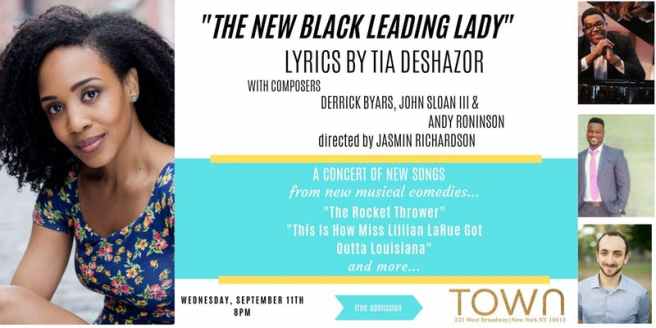 The Rocket Thrower, set in 1964 in Harlem against a sixteen year-old girl who longs to be an astronaut. The Pact, set in present day, tells the story of four long-time best friends descending on New York City for a “girl’s weekend”, and explores barriers to intimacy within interracial friendship. This is How Miss Lillian LaRue Got Outta Louisiana is set in 1940, during the height of the Great Migration, and follows Lillian’s journey as she wittily navigates Harlem’s Society, shine being pursued by the Spirit of the South. The cast features Ashley Ware Jenkins (The Lion King), Nattalyee Randall (Caroline of Change), Tyla Collier (Pola Dots), Ashanti J’Aria (Disaster!), Virginia Woodruff (Violet, The Color Purple), CK Edwards (Shuffle Along), Renee Reid (Bubbly Black Girl), Jared Joseph (Broadway Bounty Hunter), Amy Hilner (The Marvelous Wonderettes), Zak Edwards (An American in Paris), Danielle Jackman and Desiree Murphy.

Tia Deshazor (Lyricist/Librettist/Performer) made her debut as a writer with her 10-minute musical “The Rocket Thrower”, which was featured in Prospect Theater’s Musical Theatre Lab. She is actively creating change on the stage and developing new projects in the Advanced BMI Lehman-Engel Workshop. She writes lyrics for the song “I’ve Got This” from Girlhood, the Musical, and for the song “Only One” that was featured in Astoria Performing Arts Center’s of BOLD, an organization that supports Black Women in the Performing Arts, and on the board of the AEA committee for Equal Employment Opportunity and Diversity.

Andy Robinson (The Rocket Thrower Composer) Andy Robinson is a 2019 Jonathan Larson Grant recipient, a member of the BMI Lehman Engel Musical Theatre Workshop (Sherman Scholarship, Harrington Award), and a participant in the 2017 Johnny Mercer Foundation Songwriters Project. He is the creator/host of the all-original ten-minute musical podcast TAKE A TEN, which featured Broadway and NYC voices like Laura Osnes, Rob McClure, George Salazar, and many more. Episodes of the podcast have been produced live around the world and have won numerous awards including Best Musical (twice) at TNNY’s SOUND BITES, the 2016 City Theatre National Award for Short Playwriting, and top prize at the Samuel French Off-Off Broadway Short Play Festival. To hear every episode for free, visit TakeATenMusicals.com. For even more videos and songs, visit AndyRoninson.com.

Derrick Byars (Composer, The Pact/Music Director) Derrick Byars is a professional writer, composer and theatre artist. He is also the Director of Music and Arts at Park Avenue United Metodist Church. While attending college in Birmingham, Alabama, he worked at Red Mountain Theater Company and Samford University as a sound and lighting designers. Derrick is currently a part of the Tony Award-winning BMI Lehman Musical Theatre Workshop. He has directed many shows including Annie, Fame, You’re a Good Man, Charlie Brown, and On the Town. His most recent directing credit was an immersive production of Andrew Lippa’s The Wild Party. As a composer, lyricist and book writer, Derrick strives to tell interesting stories combining new techniques with traditional values. He is extremely excited to be writing The Pact with Tia DeShazor and to be a part of bringing the new black leading lady to life.

John Sloan III (Composer, This Is How Miss Lillian LaRue Got Outta Louisiana) Born and raised in Metro-Detroit, John studied Musical Theatre at the University of Michigan (BFA program ’01-’05) and has two decades of experience as a professional artist. An accomplished musician and actor, Sloan has performed in numerous regional theatre productions, commercials, concert events, and on the national tour of Disney’s The Lion King. In addition to his performance career, Sloan has worked as a writer, composer, script consultant and director; with his original work featured in venues and concerts across the country. Recent efforts include producing, directing and scoring film projects featured at the BlackStar Film Festival 2018 (Philadelphia) and Freep Film Festival 2019 (Detroit). As the founder and Artistic Director of GhostLight Productions, he regularly curates events of all sizes for corporate clients. And through his outreach organization The Helping Hands Campaign for the Arts, his efforts are dedicated to the intersection of art and activism. www.ghostlightinc.com www.helpinghandscampaign.org

Jasmin Richardson (Director) She made her directorial debut Kirsten Childs’ poignant piece “Bubbly Black Girl”…As she continues her mission in telling stories that empower women of color, joining forces with Tia DeShazor in presenting this collection of work that highlights the many facets of womanhood, while still being authentically black and telling important stories, written and performed by people of color. Jasmine’s Broadway credits include Book of Mormon, Broadway debut in Gettin’ The Band Back Together. she played Mikki Marron in the First National Tour of The Bodyguard. She will be performing at Lincoln Center later this month in a series called Warrior Women, which is a thrilling, live-action concert performed by Orchestra Moderne NYC featuring the music of renowned Hollywood female film composers.