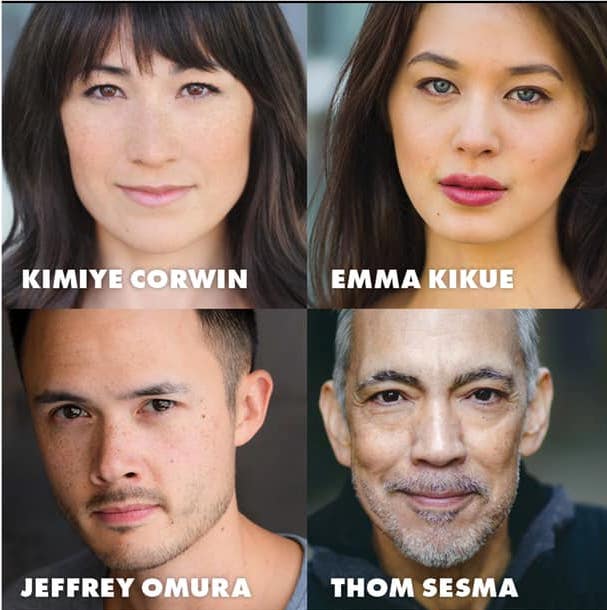 FRUITING BODIES is the story of two sisters in a Northern California forest which seems to keep shape-shifting around them, as they go looking for their father who has gotten lost on a routine mushroom-hunting expedition. After encountering a mysterious young boy who bears a striking resemblance to their absent brother, the family searches for the road back, tackling limited visibility and the interfamilial politics of race and gender, pushed to extremes.

Emma Kikue (Vicky) recently made her Off Broadway debut as SOPHIE in the premiere of God Said This, produced by Primary Stages at the historic Cherry Lane Theater. Previously, Emma had a recurring role in USA’s THE SINNER, appeared on “Madame Secretary” and will guest star in the upcoming season of “Elementary”.

Sam Chanse (Playwright). TRIGGER, THE OPPORTUNITIES OF EXTINCTION, and WHAT ARE YOU NOW. Her work has also been developed with the Lark, Cherry Lane, Leviathan, Ars Nova, and EST/Sloan, and is published by Kaya Press (LYDIA’S FUNERAL VIDEO) and TCG (The Kilroys List). A former fellow at MacDowell, Cherry Lane Mentor Project, Sundance, and Playwrights Realm, she has also received residencies from Djerassi, Tofte Lake Center, and SPACE at Ryder Farm. She is a Lark Venturous Fellow, a resident playwright of New Dramatists, and a member of the Ma-Yi Writers Lab.

Tickets to FRUITING BODIES at Theatre Row are on sale now. Tickets range in price from $32.25 to $42.25 and can be purchased by calling the Telecharge phone number 212-239-6200 or online at www.telecharge.com. Please also check out Theatre Row’s website, www.theatrerow.org, and The Ma-Yi Theater Company website for additional information, www.ma-yitheatre.org.