Feinstein’s/54 Below is celebrating the 40th Anniversary of the Tony Award winning musical AIN’T MISBEHAVIN’ with 54 SINGS AIN’T MISBEHAVIN’: THE MUSIC OF FATS WALLER , directed by its original Tony Award-winning director, Richard Maltby, Jr. for two shows on tonight at 7pm and 9:30pm. Click here for tickets. 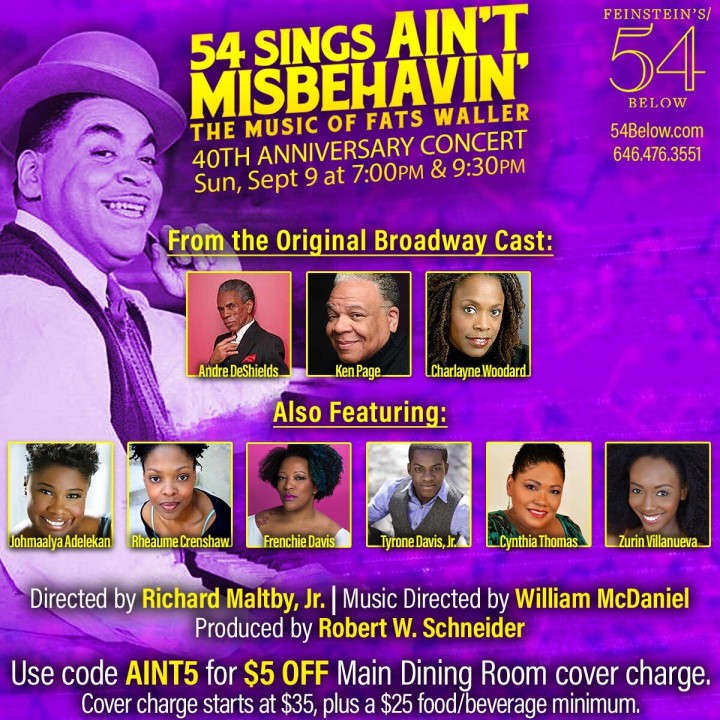 The concert will be directed by the show’s original Tony Award-winning director and co-conceiver, Richard Maltby, Jr.

Receiving five Tony Award nominations, AIN’T MISBEHAVIN’ opened at the Longacre Theater in 1978 and played 1600 performances. The original company featured Nell Carter, André De Shields, Armelia McQueen, Ken Page, and Charlayne Woodard. The show was choreographed by Arthur Faria and featured arrangements by Luther Henderson. The show was conceived by Mr. Maltby and Murray Horowitz. A revival of the show hit Broadway in 1988.

AIN’T MISBEHAVIN’ features some of Fats Waller’s most iconic songs including “The Joint Is Jumpin,” “Your Feets Too Big,” “Mean To Me,” “Honeysuckle Rose,” and so many more.

54 SINGS AIN’T MISBEHAVIN’ will be produced by Robert W. Schneider. The show will be music directed by William McDaniel. The associate producer will be Benjamin Nissen.

Schneider said, “AIN’T MISBEHAVIN ‘is the epitome of a perfect revue. I am so thrilled that the man who helped bring this show to life forty years ago, the incomparable Tony Award winner Richard Maltby Jr, is once again taking the helm on this project and will be bringing Waller’s timeless music back to New York audiences. The joint, pun intended, will be jumpin!”

Tickets, starting at $30, are still available. In addition to the ticket price, there is food and beverage minimum of $25.00 54 SINGS AIN’T MISBEHAVIN tickets can be purchased at 54below.com. Tickets on the day of performance after 4:00 are only available by calling (646) 476-3551