J. Elaine Marcos will debut her one woman show What I Did for…a Job at Feinstein’s/54 Below on September 5 at 9:30 pm. Click here for tickets. Use code JEM5 for $5 off.

Ms. Marcos is back on Broadway in Gettin’ the Band Back Together through September 16 and received the Legacy Robe on opening night.

In What I Did for… a Job, J. Ms. Marcos humorously reveals her approach to auditioning for musicals and shares her unique journey in what it took to book 9 Broadway Shows.

“I had to learn to break the “rules” in order to be noticed and many of my audition pieces were practically cabaret acts. So, I put them all in a show,” says the Broadway vet. 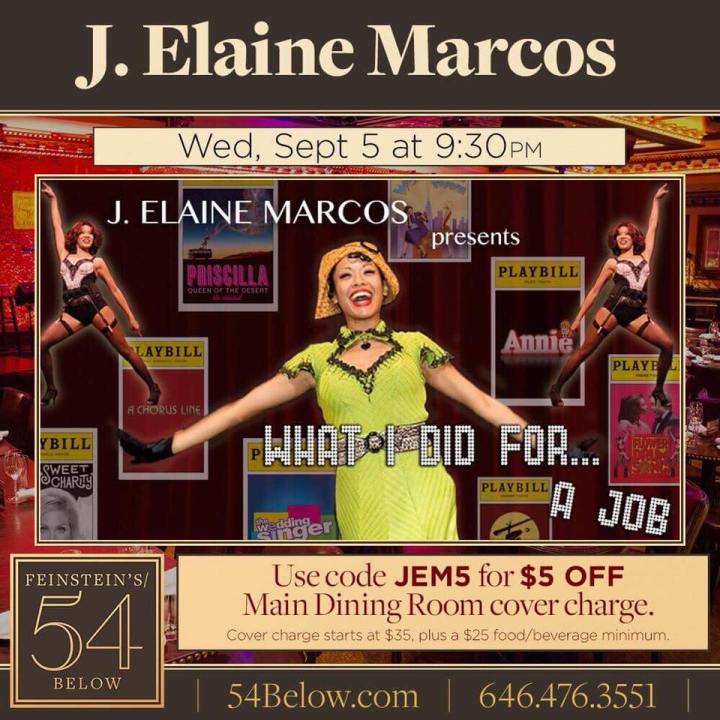 Ms. Marcos will be joined by fellow Gettin’ the Band Back Together cast member Ryan Duncan along with some special cameos from her Broadway past and William McDaniel on the keys.

Prior to relocating to the West Coast she re-created the role of ‘Lily St. Regis’ in the revival of Annie along side Jane Lynch. Her comedic reputation began after her portrayal of ‘Cynthia’ in Priscilla Queen of the Desert, earning her an Astaire Award Nomination for Excellence in Dance. Additional Broadway credits include the revival of A Chorus Line, The Wedding Singer, Flower Drum Song, Sweet Charity, Wonderful Town, and Miss Saigon.

On screen, J. Elaine made her feature film debut in Morning Glory as ‘Lisa Bartlett’ opposite Rachel McAdams; and went on to appear in St. Vincent with Bill Murray. On TV she appeared in :Grace and Frankie,” “2 Broke Girls,” “School of Rock,” “30 Rock” and “Law & Order: SVU,” and is featured in the documentary Every Little Step.

Feinstein’s/54 Below, Broadway’s Supper Club & Private Event Destination, is a performance venue in the grand tradition of New York City nightlife. Feinstein’s/54 Below presents iconic and rising stars from the worlds of Broadway and popular music and has set a new standard for culinary excellence worthy of the world-class entertainment on the stage. Located at 254 West 54th Street.