In 1834, Afong Moy is brought to the United States from Beijing and put on display for the American public as the “Chinese Lady.” Over the next 45 years, she performs in a side show that both defines and challenges her own view of herself. Inspired by the true story of America’s first female Chinese immigrant, playwright Lloyd Suh spins a tale of dark poetic whimsy in this piercing portrait of America as seen through the eyes of a young Chinese woman.

Lia: Where are you staying?
Daniel: We are staying in a beautiful newly renovated home right off the main strip of Pittsfield, MA.

Lia: Please describe your characters.
Daniel: I like to joke that I play the title character but really that’s all Shannon.

Shannon: Afong Moy is “The Chinese Lady”, as she was billed, and so far as history can tell, the first woman of Chinese descent to arrive in America. Afong Moy wasn’t her real name, but rather a name given to her that was easier for western people to pronounce. She came to America as a sort of sideshow attraction, used as a prop in order to sell “exotic” goods from the Carne Brother’s Far East Oriental Import Company.

Daniel: Atung is Afong Moy’s translator. There are accounts of a translator being a part of her act but Atung is from Lloyd’s imagination. In this play, he was first assigned to the Carne Brothers as a manservant and became Afong’s translator and perhaps sole companion. It’s a disturbing and little known piece of American history that Lloyd has expanded upon with beautiful poetry and dark imagination.

Lia: Please describe your relationship to each other.
Daniel: If we describe it too much it’ll give away spoilers. For now, we’ll say that Atung is Afong Moy’s translator and go from there. Also, our director, Ralph B. Peña, would want us to say that our relationship is constantly with the audience. After our first run-thru, Shannon said, “it feels like us against the world.” It really feels like that sometimes.

Shannon: But on a real-life level, Daniel and I are very lucky that we get along well, professionally and personally.

Lia: What kind of research did you do for your roles?
Shannon: For the last few years, I’ve been very invested in learning as much as possible about Asian American history. Specifically for this show, I took a deep dive into the effects of the Opium Wars on migration, along with footbinding, and also what little there is recorded about Afong Moy. Luckily, I love history, so it was more recreation than compulsory.
Daniel: Shannon wins.

Lia: What are the challenges of performing in a two-hander?
Shannon: It’s exhausting! Once the last scene plays, I have a brief moment of adrenaline high, then I crash and want to lay flat on my back and drop french fries into my mouth.

Daniel: Lia, you know this is my second two-hander this year, so I will agree with the crash and french fries (extra crispy for me) sentiment. Also, bourbon. Lots of bourbon.

Lia: What is the allure of performing at Barrington Stage?
Shannon: I always think it’s nice to be out of town in order to focus solely on work. It’s also nice to be close to nature when you’re cooped up inside a theatre all day, and the Berkshires are beautiful.

Daniel: I think it’s a privilege every time I get to work on a new play. And especially a world premiere! 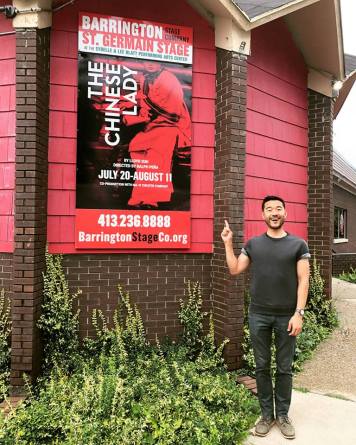 Lia: Have you had the opportunity to do much exploring?
Daniel: We went zip-lining earlier this week and we have some hikes and whitewater rafting adventures planned!

Shannon: Besides our aforementioned zip-lining excursion, we have a lot of adventures in the works. Daniel is an Eagle Scout so I plan to put myself in as much danger as possible and I expect him to be ready to help me whenever possible. I’ll be like Inspector Gadget and Daniel will be Penny.

Daniel K. Isaac (Atung) is an actor and writer born and raised in Southern California, currently based in New York City. You can currently see him on the small screen as ‘Ben Kim’ in Showtime’s “Billions.”

Isaac co-wrote and stars in the short film/pilot presentation, “According To My Mother.” The project was selected for IFP Film Week and the inaugural Sundance New Voices Lab and was an Official Selection at ITVFest, Newfest, Outfest Fusion, Outfest, CAAMfest, SeriesFest (where it was awarded Best Actress), and New York Television Festival (Best Drama and Best Actor). “According To My Mother” is currently in development to become a digital series on First Look Media’s new platform, TOPIC. Isaac is a member of Page 73’s 2018 Interstate 73 Writers Group, Ensemble Studio Theatre’s Youngblood, and a Lambda Literary Playwriting Fellow. Training: UCSD, BADA. www.AccordingToMyMother.com

Playwright Lloyd Suh is the author of Charles Francis Chan Jr’s Exotic Oriental Murder Mystery, American Hwangap, The Wong Kids in the Secret of the Space Chupacabra Go!, Jesus in India, Great Wall Story, and others, produced with Ma-Yi, Magic Theatre, Ensemble Studio Theatre, The Play Company, La Mama, Denver Center Theatre Company, ArtsEmerson, The Guthrie Theatre with Mu Performing Arts, East West Players, and internationally at the Cultural Center of the Philippines in Manila, and with PCPA in Seoul, Korea. He has received support from the NEA Arena Stage New Play Development program, the Andrew W. Mellon Launching New Plays Into the Repertoire initiative via the Lark, NYFA, NYSCA, Jerome Foundation, TCG, and Dramatists Guild, and has been a recipient of the Roe Green Award from Cleveland Playhouse, the Lilah Kan Red Socks Award, and the Helen Merrill Award. His plays have been published by Samuel French, Playscripts, Smith & Kraus, Duke University Press and American Theater magazine. He is an alum of Youngblood and the Soho Rep Writer/Director Lab, and from 2005-2010 served as Artistic Director of Second Generation and Co-Director of the Ma-Yi Writers Lab. He currently serves on the Dramatists Guild Council and has since 2011 served as Director of Artistic Programs at The Lark.

Director Ralph B. Peña is the current Artistic Director of Ma-Yi Theater Company. Recent directing credits include Among the Dead, House Rules (Ma-Yi) The Orphan of Zhao (Fordham Theatre), Macho Dancer: A Musical (Cultural Center of the Philippines), Livin’ La Vida Imelda (Ma-Yi), Lloyd Suh’s The Wong Kids in the Secret of the Space Chupacabra GO! (Cultural Center of the Philippines, Children’s Theater Co. and Ma-Yi, Off Broadway Alliance Award), Julia Specht’s Down Cleghorn, Joshua Conkel’s Curmudgeons in Love (EST Marathon), Mike Lew’s microcrisis(Youngblood, Ma-Yi), and House/Boy (Dublin and Singapore Theater Festivals). His theater work has been seen at The NYSF/Public Theater, Long Wharf Theater, Laguna Playhouse, NAATCO, Second Generation, Victory Gardens, and LaMama ETC, among others. He received an Obie Award for his work on The Romance of Magno Rubio. Ralph is a member of the Ensemble Studio Theater. This is for Damien, always and forever.

Up Close and Personal with Daniel K. Isaac – William Inge in Abingdon Theatre’s Production of THE GENTLEMAN CALLER by Philip Dawkins, May 5 – 26