Congratulations to Marcus Choi, who has been cast as George Washington in the second national tour of Hamilton. Performances begin February 6, 2018 at the Paramount Theatre in Seattle for a six week limited engagement before touring North America.

Choi has been rehearsing for Hamilton while appearing in the Broadway revival of Miss Saigon. He has appeared in the Original Broadway companies of Flower Drum Song, Wicked,  The Times They Are A-Changin’, Allegiance, Christina Applegate’s Broadway production of Sweet Charity and the City Center Encores’ productions of Kismet. He has performed in the NY workshops of Bruce Lee: Journey to the West,  Frank Wildhorn’s Tears of Heaven and Hadestown. His regional credits include Mysterious Skin (Broadwayworld.com Best Supporting Actor nomination) and Pippin at East West Players, Dangerous Beauty, and most recently the US premier of Waterfall at Pasadena Playhouse.

Marcus took the time to answer a few questions via email on New Year’s Day.

Lia: What was it like to be back on Broadway with this company of Miss Saigon?
Marcus: It was such a joy to join this company. I’ve never done Miss Saigon, so it was an honor to be able to do the show at this level. The attention to detail and the sheer grandness of the show was breath taking.

Lia: What did you do when you heard the news you were cast in Hamilton?
Marcus: I was on the 7 train going out to Queens with a couple of friends. I think we screamed and group hugged while jumping in a circle.

Lia: Has this been a goal for you?
Marcus: Yes, Hamilton has always been on my radar. I think whenever a new show comes out and is a hit, we always wonder if there’s something “right” for me in it. I think one of the genius things about the show and the way it’s constructed is that anyone can live in this world and tell this story.

Lia: What have you been up to this year?
Marcus: I feel like the first half of 2017 was a blur. I was trying to audition as much as I could and I was fortunate enough to shoot a few tv shows like and work on a couple of films. One of the thing’s I love about working in NY is that there are always readings and developmental workshops going on. I love the creative process of building something from the ground floor. So when I wasn’t working, I tried to do as many of those as I could.

I’m just consumed with double duty right now, but there’s something that I’ve been feeling while in rehearsals. I feel so fortunate to be able to play this role. I know it’s such a great opportunity for me, but I can’t help but feel like it’s a big win for our community. Asian Americans are the most under represented ethnic group in entertainment and I am so grateful to Hamilton for taking the chance and casting Asians in principal roles for this tour. Joseph Morales and Shoba Narayan along with myself! 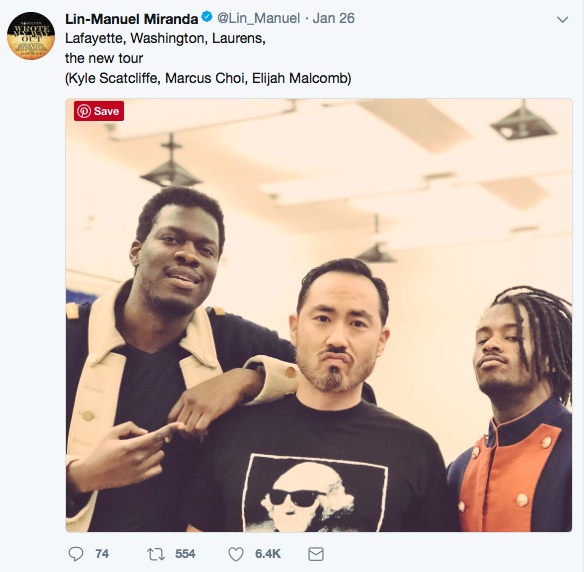 This new company continues the remarkable run of Hamilton productions that have rolled out since the musical first opened on Broadway in 2015. A Chicago company opened in September 2016; the first national tour began performances in San Francisco on March 10, 2017; and the West End engagement began December 6, 2017 at London’s Victoria Palace Theatre.

With book, music and lyrics by Lin-Manuel Miranda, direction by Thomas Kail, choreography by Andy Blankenbuehler and musical supervision and orchestrations by Alex Lacamoire, Hamilton is based on Ron Chernow’s biography of Founding Father Alexander Hamilton.

Hamilton is the story of America’s Founding Father Alexander Hamilton, an immigrant from the West Indies who became George Washington’s right-hand man during the Revolutionary War and was the new nation’s first Treasury Secretary. Featuring a score that blends hip-hop, jazz, blues, rap, R&B, and Broadway, Hamilton is the story of America then, as told by America now.

The Hamilton creative team previously collaborated on the 2008 Tony Award ® Winning Best Musical IN THE HEIGHTS.

The musical is produced by Jeffrey Seller, Sander Jacobs, Jill Furman, and The Public Theater.