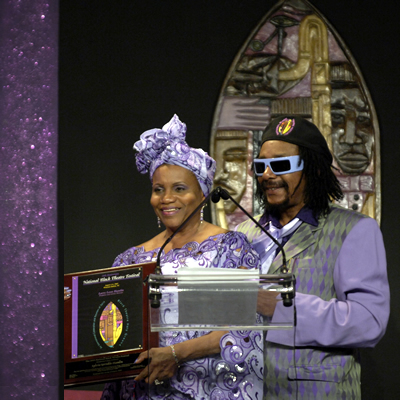 Please contact the NCBRC office to purchase ticket(s) for this event.

Festival History
Founded in Winston-Salem by the late Larry Leon Hamlin in 1989 and hosted by the North Carolina Black Repertory Company (NCBRC), NBTF is a biennial event with a purpose of uniting black theatre companies from around the world and ensuring the presence of this phenomenal genre. Mr. Leon Hamlin described the experience as “MARVTASTIC,” a combination of marvelous and fantastic! With the support of Dr. Maya Angelou, who served as the Festival’s first Chairperson, the National Black Theatre Festival was born. The ’89 Festival offered 30 performances by 17 of America’s best professional black theatre companies. It attracted national and international media coverage. According to The New York Times, “The 1989 National Black Theatre Festival was one of the most historic and culturally significant events in the history of black theatre and American theatre in general.” Over 10,000 people attended. Today that number reaches well over 65,000 attendees.

Ten years prior to starting the National Black Theatre Festival, Larry Leon Hamlin founded another black theater movement in Winston-Salem that is still present today. The North Carolina Black Repertory Company is the state’s first professional Black theater company. NCBRC is committed to introducing diverse audiences to Black classics, the development and production of new works, improving artistic quality, and sustaining Black theatre internationally. NCBRC was founded with the purpose of providing theatre professionals the opportunity to earn a living through their craft.

NCBRC presents three to four productions annually featuring members of its ensemble or through collaborations with other theatre companies from around the country. The annual Martin Luther King, Jr. Birthday Celebration and the holiday presentation of Langston Hughes’ Black Nativity have become two of the Company’s staples. The critically acclaimed NCBRC production, Mahalia, Queen of Gospel (written and directed by Mabel Robinson, the company’s Artistic Director) was a National Black Theatre Festival showcase performance.