The revival of Miss Saigon, helmed by Laurence Connor, opened in its original home, The Broadway Theater featuring four of its London stars, Jon Jon Briones as The Engineer, Eva Noblezada as Kim, Alistair Brammer as Chris and Rachelle Ann Go as Gigi on March 23, 2017. The cast also includes Katie Rose Clarke as Ellen, Nicholas Christopher as John, Devin Ilaw as Thuy.

The revival of Miss Saigon began previews on March 1st, and will play a limited engagement through January 13, 2018 before launching a North American tour later in the year.

Miss Saigon received two Tony nominations for Best Revival and Best Performance by a Leading Actress in a Musical for Eva Noblezada.

Tony Award winner Lea Salonga and Jon Jon Briones, who appeared in the original London production together, introduced a medley of songs featuring Ms. Noblezada and the cast of Miss Saigon at the 71st Annual Tony Awards ceremony at Radio City Music Hall on June 11, 2017.

Mary Beth Peil and Eva Noblezada (l. to r.) attend Designed To Celebrate: A Toast To The 2017 Tony Awards Creative Arts Nominees at The Lamb’s Club at the Chatwal NY on June 1, 2017. Credit: Shevett Studios 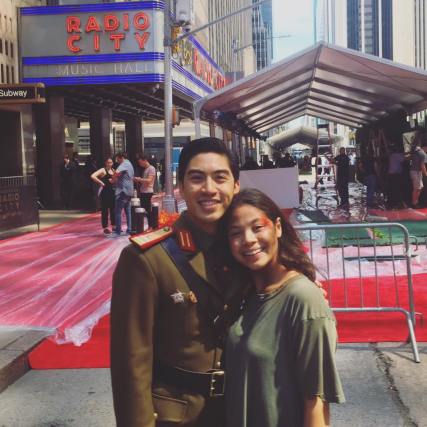 Dancing the Night Away with the Cast of MISS SAIGON